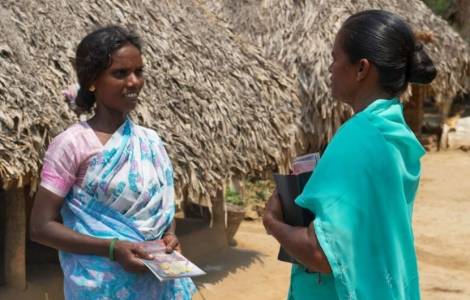 2021-12-04
The Indian faithful honor Francesco Xavier, Patron of the missions

New Delhi (Agenzia Fides) - A delegation of Indian, Catholic and other Christian Bishops met with federal ministers to ask for the repeal of the anti-conversion laws, approved by governments in some states of the Indian Federation.
As Fides learns, Msgr. Anil Joseph Thomas Couto, Archbishop of Delhi, Msgr. Kuriakose Bharanikulangara, Archdiocese of Faridabad, of the Syro-Malabar Church of the Eastern Rite, and Msgr. Subodh C. Mondal of the Methodist Church in India in the episcopal area of Delhi were also part of the delegation and held a special meeting with Mukhtar Abbas Naqvi, Federal Minister for Minority Affairs, and John Barla, Undersecretary. The delegation, which met with the authorities on September 28th, was made up of 50 Christian leaders representing different denominations. On behalf of all, Msgr. Couto presented a Memorandum containing various issues that affect Christian minorities in the Country and the theme of religious freedom.
The anti-conversion laws, in force in several Indian states, prohibit religious conversion by force or deception and are a crime punishable with various sanctions.
Some of the states that have enacted laws to ban religious conversions are Odisha, Uttar Pradesh, Arunachal Pradesh, Chhattisgarh, Gujarat, Jharkhand, Himachal Pradesh, Madhya Pradesh, and Uttrakhand.
The anti-conversion laws, according to the Bishops, violate the letter and the spirit of the Indian Constitution which provides for the freedom to practice, promote and propagate one's religion according to conscience and freedom.
In this phase, another state, Karnataka in southern India, is planning to enact such a law. On September 28, the Prime Minister of the State, Basavaraj Bommai issued an order to limit "forced conversion", although the ten bishops of Karnataka met him in the previous days, hoping not to proceed with any new legislation.
Karnataka is a vast state in South India ruled by the Hindu nationalist Bharatiya Janata Party (BJP).
Following a widespread ideology within the BJP (the so-called "Hindutva"), Hindu nationalists would like to transform India from a secular country to a Hindu theocratic state. Currently, the states of Himachal Pradesh, Uttar Pradesh and Madhya Pradesh, which have already enacted controversial anti-conversion laws, are governed by the BJP.
The Bishops' delegation has expressed concern to federal ministers about new legal restrictions that limit or prevent the possibility of foreign donations for charitable works aimed at the poor and vulnerable communities of the Country. Minister Naqvi underlined the shared cultural heritage and the legacy of coexistence between the various religious communities. He also said that "any attempt to disturb this fabric of unity and harmony will damage the soul of India", he added.
The delegation also informed the federal government of repeated violence against Christians and of episodes of destruction or looting of churches across the Country. In a recent case on September 17, five Christian families in the district of Kandhamal, in the state of Odisha, were subjected to abuse and violence by Hindus and at least one house belonging to a Christian was burned. In most cases - the Bishops said - the police and government officials do not pay much attention to the complaints of Christians. Again ministers have assured Christian leaders that they will look into the matter.
The delegation informed the government about discrimination (on a religious basis) against Dalit Christians and Muslims who cannot enjoy the benefits granted by the government to Dalits, which affect work, employment and other welfare measures.
Finally, the leaders of the Churches asked the federal government for contributions to establish a federal Christian university, with public and private funds, thinking of it as a great center of education for the benefit of all citizens, of any culture, ethnicity or religion. According to the 2011 Indian census, there are 966 million Hindus, about 80% of India's population estimated at 1.3 billion. Muslims are 172 million (14%), while Christians are 29 million (about 2.3%) (SD-PA) (Agenzia Fides, 30/9/2021)