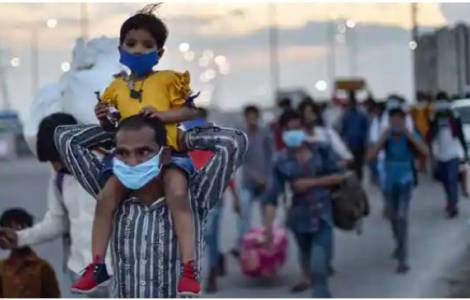 New Delhi (Agenzia Fides) - "In today's India, division and polarization, chauvinism and xenophobia have gripped different parts of society, especially because of the poisonous hate speech by politicians. A large part of society today speaks of 'Us' and 'Them'. The tendency is to exclude others: because of what he eats or wears, reads or sees, believes or professes, because of the color of his skin or his ethnicity. In this painful context, the message by Pope Francis 'Towards an ever wider us' for the 107th World Day of Migrants and Refugees, celebrated by the Catholic Church on September 26, not only has a profound meaning, but provides precise direction for all those who claim to be disciples of Jesus", said writer and human rights activist Father Cedric Prakash (JS) to Fides on the eve of World Migrants Day.
"The incipit of the Pope's message - notes the Indian Jesuit - makes his intention clear, that is, no longer to reason in discriminatory or exclusive terms, but only to use "we", to indicate a clear horizon for the common path in this world". "The Pope", he emphasizes, "denies short-sighted and aggressive forms of nationalism and radical individualism, which penalize and stigmatize above all those who are more easily seen as 'others': foreigners, migrants, marginalized people, those who live in existential peripheries". Father Prakash continues: "Pope Francis has made concern for refugees and migrants a hallmark of his pontificate. His message essentially points to an increasingly Catholic, that is, universal Church that invites every community of believers to enlarge his tent to embrace everyone. Among the people who live in these existential fringes, we find many migrants and refugees, displaced persons and victims of human trafficking, to whom the Lord wants to reveal his love and proclaim his salvation".
Fr. Stephen Raj SJ, regional director of the Jesuit Refugee Service for South Asia, speaking of the challenges that refugees face today in India, notes: "The refugees from Myanmar, who are pouring into Manipur and Mizoram (in northeastern India), face unspeakable difficulties for survival. They are in dire condition and in urgent need of food, clothing, shelter, medical care and protection. For them, reaching the headquarters of the UN High Commissioner for Refugees in New Delhi, where they can apply for asylum or be recognized as refugees, is the biggest challenge. Without refugee status they remain illegal and face constant threats of harassment and imprisonment. The situation of refugees or forcibly displaced people is getting worse because of the pandemic. Existing vulnerabilities of the refugees are exacerbated. Refugees need a well-integrated and comprehensive rehabilitation program to address their problems to promote life and promote their dignity".
Faced with this situation, which requires the solidarity of the entire Catholic community in India, Father Prakash concludes with a wish: "Let us dare to dream together and act courageously as a 'we' in order to be authentic witnesses of Jesus in the India of today. Every migrant or refugee is the 'other' in our midst. (PA) (Agenzia Fides, 25/9/2021)