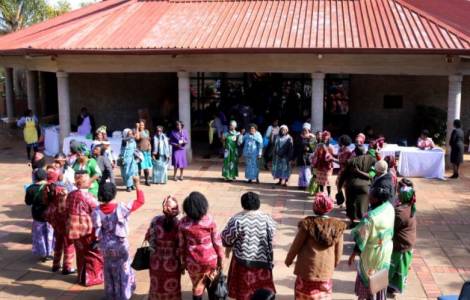 Mlakal (Agenzia Fides) - "The Church, regardless of the conditions in which it operates and the dangers it faces, continues to be prophetic. Hit hard over the years here in South Sudan, it does not seek revenge but justice, for the people first of all, which is the prerequisite for stable peace". This is the message, released to Fides, that Sister Elena Balatti, a Comboni missionary in Malakal, Upper Nile State, launches at this extremely delicate moment for the country and after yet another episode of violence against representatives of the Christian faith, which cost the lives of Sister Mary Daniel Abbud and Sister Regina Roba, two nuns of the Sacred Heart of Jesus - as well as two other men traveling on the same bus and a taxi driver who was run over - last August. The nun told Fides: "It was a very hard shock, I knew Sister Mary well, the previous superior of the order founded by Comboni Institutes, killed while returning from Nimule, on the border with Uganda, to Juba. The sisters were all coming from a very important celebration in Loa, which had aroused much joy and hope as it marked the reopening of the parish after the years of war. Catholic President Salva Kiir, the bishop and many other people were present. The atmosphere was excellent and there was an air of relaxation and an initial return to normal after so many years. Unfortunately, the brutal murder has a matrix linked to the parish lands which had been occupied during the years of the hard war. By hitting the minibus and trying to kill nuns and faithful returning from this celebration, the intention was to give a Mafia-like signal against the appeal of the president and bishop to return to revive the area: a real intimidation for those who thought to take back the expropriated land. It is an absurd concept, also because there is enough land for everyone. The attackers wanted to set fire to the vehicle and by sheer luck they did not succeed, otherwise the death toll would have been much higher".
Exactly three years after the signing of the "Revitalized Accord" which put an end to the conflict and started a new phase of national unity, the situation in South Sudan remains very uncertain and some fear a return to the dark times after years of initial progress towards peace. "The implementation of some fundamental parts of the agreement, which had the celebration of elections and democratic government in a reconciled society as its ultimate goal, is lacking, notes Sr. Elena. One of the main obstacles is the inability to unify military forces on the ground, which should have led to a unified army. The various militias remain faithful to their flags, which creates a lot of confusion and tension. The media often claim that preparations are underway for the final phase of this unification, but there are no signs of concrete results. In addition, last July, according to the Comboni missionary, something serious happened with regard to the peace process: "After months of strong tensions, there was a split within the party of
Vice-President Riek Machar, (SPLA-IO) (the dissident group has for some time been critical of Machar's choices and style and has appointed another interim leader, Gatwech Dual, ed).
This umpteenth division within the party which has been the main signatory, apart from the government, of the Revitalized accord, certainly does not help the process towards stability and triggers new problems: not far from Malakal, where I live, there have been clashes between the two factions, with a few victims. Negotiations are underway to reduce this gap, but things are progressing slowly. It must also be said that the negotiations in Rome to involve in the peace process also the trade unions which have not yet signed the agreement, have been at a standstill for some time now". Years of fierce conflict, political instability, mass exodus, have brought the country, rich in raw materials and resources, to the brink of economic ruin. The urgency of peace is also dictated by the need to change course: "The economic crisis - Sister Balatti notes - persists and keeps the majority of the population of a very rich country in a situation of unjust poverty and misery; the management of resources is lacking and the great wealth that nature, minerals, oil, agriculture and the Nile provide us remain far from the people. We can say that Covid has not particularly affected us here, but the economy was bad before and still is". The missionary concludes with a note of hope: "Education and the right to education, also thanks to the Church, are spreading and are seen as a good thing and people don't want to do without. The people, thanks to a deep capacity to adapt to bleak situations, manage to find ways to move forward and celebrate life even in shocking times. There is also a lot of hope in the new generation of politicians, that politics will become the domain of civilians and no longer of the military". (LA) (Agenzia Fides, 25/9/2021)