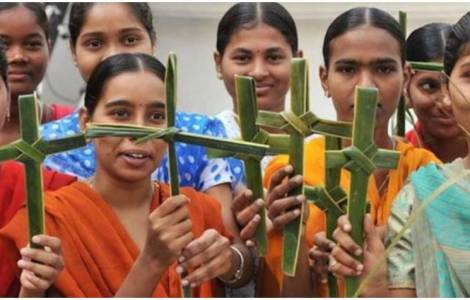 Bangalore (Agenzia Fides) - The ten Catholic Bishops of the state of Karnataka, in southern India, met Chief Minister Basavaraj Bommai to voice their opinion over a proposed law to ban forcible religious conversions in the state.
The delegation that met the Prime Minister on September 22, was led by Msgr. Peter Machado, Archbishop of Bangalore, who submitted a Memorandum on various issues that affect the life of Christians in Karnataka. According to Archbishop Machado, raising fear of "forced conversions" is harmful and useless, and the Catholic Church expresses all its disappointment. The Christian community in the state runs schools, colleges and hospitals across the state but have never advised or forced a single student or patient to get converted to Christianity. Some minor cases may have occurred, but they have been blown out of proportion, Archbishop Machado said. "The proposed anti-conversion law aims to defame Christianity", the Archbishop stressed. In fact, the Christian community assumes full moral responsibility not to indulge in forced conversions: "We do not force anyone", he said.
In the Memorandum submitted to the Prime Minister, the Bishops note that any anti-conversion law could cause "problems in inter-community relations and unnecessary unrest", generating controversial statements and reactions and causing turmoil in society and religious communities.
On September 21, Goolihatti Shekhar, a member of the State Legislative Assembly and a member of the Hindu nationalist Bharatiya Janata Party (BJP), raised the issue in Parliament saying, "Christian evangelical missionaries are indulging in a rampant campaign of religious conversion in my constituency of Hosadurga.
About 20,000 people of Hindu religion have converted to Christianity". In response to this note, the President of the Legislative Assembly, Visheshwara Hegde Kageri, said that many states in India have already enacted laws to curb religious conversions and proposed similar law in Karnataka.
Speaking during the debate, Interior Minister Araga Jnanedra said the government of Karnataka will study the relevant laws in other states and present its own version.
The state government, he said, intends to investigate the issue in order to put an end to religious conversions carried out by force and other flattery.
The Indian Constitution provides that citizens have the freedom to "profess, practice and propagate" religion. However, several states of the Indian Federation have implemented and promulgated laws or regulations to discourage or prohibit religious conversions: Odisha, Uttar Pradesh, Arunachal Pradesh, Chhattisgarh, Gujarat, Jharkhand, Himachal Pradesh, Madhya Pradesh and Uttrakhand.
Karnataka is governed by the BJP party, within which members and politicians are hostile to minority religious communities. Following a widespread ideology in the BJP (the so-called "Hindutva"), some would like to transform India from a secular country to a Hindu theocratic state. (SD-PA) (Agenzia Fides, 24/9/2021)