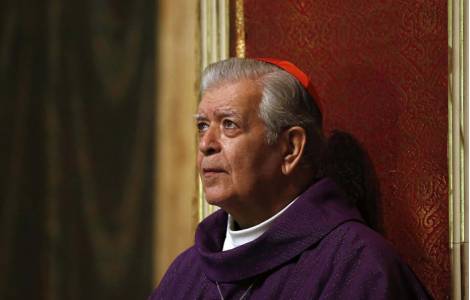 2021-09-25
Migrant Day, the Social Pastoral Care-Caritas recalls that over 5 million Venezuelans have emigrated to different countries

2021-09-24
"I have always acted for the defense of freedom, justice and the rights of the Venezuelan people": the spiritual testament of Cardinal Urosa Savino

2021-09-20
The lay ministry of the catechist: a charism for the outgoing Synodal Church

2021-09-10
Our Lady of Coromoto shows us that salvation is not only for some, but for all, without distinction of race or origin

Caracas (Agenzia Fides) - Yesterday, September 23, Cardinal Baltazar Porras, on behalf of the Archdiocese of Caracas, announced the death of Cardinal Jorge Urosa Savino, Archbishop Emeritus of Caracas, which was followed by a note from the Bishops' Conference of Venezuela. The sad news greatly affected the Venezuelan people, as the Cardinal was well loved and respected not only in Latin America, where he was well known. On August 28, he had turned 79 in hospital. He had been infected with the coronavirus more than a month ago, and immediately the infection appeared very aggressive. A week ago, the Archdiocese of Caracas published a reflection, written by Cardinal Urosa at the end of last August, in which, among other things, he stated: "I express my great affection for the Venezuelan people and my absolute dedication to their freedom, to its institutions, to the defense of people's rights against abuses committed by national governments. And in this attitude, I have always acted, not out of hatred or resentment, but for the defense of freedom, justice and the rights of the Venezuelan people. I hope that Venezuela comes out of this very negative situation".
Cardinal Jorge Liberato Urosa Savino, Metropolitan Archbishop Emeritus of Caracas, was born in the Venezuelan capital on August 28, 1942. After completing his primary and secondary studies at the "La Salle" college in Tienda Honda, Caracas (1948-1959), he studied the philosophical triennium at the interdiocesan seminary of Caracas (1959-1962) and, for theology, the "St. Augustine's Seminary" of Toronto, Canada, (1962-1965). In Rome, at the Pontifical Gregorian University (1965-1971), he obtained a degree (1967) and a doctorate in theology (1971). He received his priestly ordination on August 15, 1967 and episcopal ordination on September 22, 1982, created Cardinal by Benedict XVI in the Consistory on March 24, 2006. (CE) (Agenzia Fides, 24/9/2021)