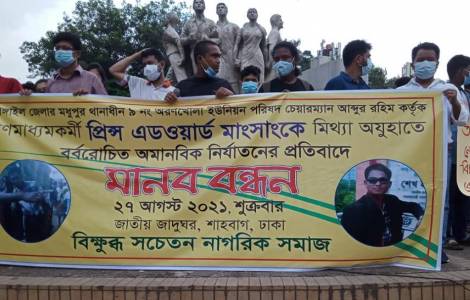 Tangail (Agenzia Fides) - A Catholic journalist of the Garo ethnic group, Prince Edward Mangsang, was attacked and severely beaten on charges of having destroyed assets worth 45 thousand Bangladeshi taka (about 450 euros). In a serious act of private violence, the man was tied to a tree in a public square and beaten by Muslim Abdur Rahim Ahmed, president of the Aronkhola Union Council, a government body in the Madhupur area, part of the Tangail district, a city in the north of Dhaka. Some even posted the photo of the battered and tortured journalist on social media. The local police who were alerted, intervened to save him from the lynching and took him into custody. As Fides learned, Edward Mangsang is a journalist who works for the Bangladeshi information portal www.aswabi.com which mainly publishes local news from Tangail.
Ahmed filed a lawsuit against Mangsang, falsely accusing him of assaulting his driver and maid, stealing 20,000 Bangladeshi takas and destroying property in his home worth 25,000 taka.
The journalist denies any wrongdoing and is supported by Christian and civil society organizations in the area. In recent weeks Shamol Mankhin, Secretary of the "Abima Garo" Youth Association organized a human chain to protest against the unjust violence against ethnic Garo journalists, marginalized tribals and victims of abuse. Mankhin told Fides that the incident is a violation of human rights and clear intimidation: "Edward Mangsang, in his investigative work, was investigating issues involving Abdur Rahim Ahmed in corruption cases. This is why the legal procedure, which is completely artifact, wants to intimidate him, the accusations against him are false and serve to misdirect the truth". Mangsang, released on bail for a few days, tells Fides: "The Garo, a tribal group and also a minority religious community, as Christians, are often victims of Muslims who abuse their power. Other Muslim journalists have also reported news on the alleged corruption of Abdur Rahim Ahmed, but he targeted me and attacked me, thinking he could go unpunished".
Ahmed, in fact, did not send a written reply to the web portal to deny the accusations, but filed a lawsuit with false accusations against the Catholic journalist: "Ahmed is in the eye of the storm because, thanks to government projects, he has increased his personal property. In doing so he wanted to take revenge", Mangsang notes. Abdur Rahim Ahmed also launched a defamatory campaign against the Garo tribals, claiming that they spread false news about them and instigating hatred against them: "I mean: bring evidence of my corruption and then I will resign from the government office", he declared. Police in Madhupur are investigating the matter. Rezaul Karim, investigative officer in the Madhupur police station, tells Fides: "Mangsang has already obtained bail. We are investigating the accusations against him and the implications of the affair. If Mangsang is innocent, he will get justice". (FC) (Agenzia Fides, 23/9/2021)