AMERICA/PARAGUAY - The relics of "Chiquitunga", the first Paraguayan Blessed, return to their homeland 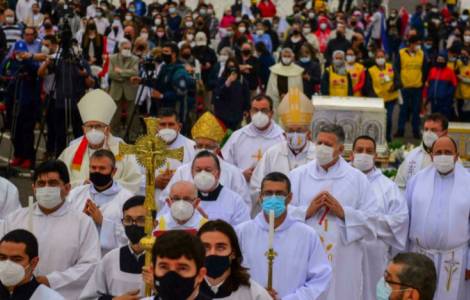 Asuncion (Agenzia Fides) - It was a great mobilization, perhaps the largest since Paraguay experienced the pandemic, that of the Catholic faithful to welcome the relics of María Felicia de Jesús Sacramentado, known as "Chiquitunga", the first Paraguayan beatified (see Fides, 25/6/2018), who arrived at the Asunción International Airport on Tuesday, September 21. The relics three years ago were sent to Rome for a conservation process. After the Mass celebrated in the parking lot, in the presence of the faithful and the authorities, the urns were transferred to the monastery of the Discalced Carmelites, an order to which the Blessed belonged, who died in 1959 at the age of 34. There was a large presence of faithful despite the arrival time of the plane from Rome, around 5 in the morning, local time, which was broadcast by most of the country's radio and television stations. According to the note sent to Fides, the Mass was presided in front of the airport, by the President of the Paraguayan Bishops' Conference, Mgr. Adalberto Martínez Flores, Bishop of the diocese of Villarrica del Espíritu Santo, in which the Archbishop of Asunción, Mgr. Edmundo Valenzuela took part. Also present were the relatives of the Carmelite nun, many of whom carried bouquets of flowers, portraits of the Blessed and flags of Paraguay. "Chiquitunga was chosen especially by God through various ministries for her perfection in holiness: she was an apostle, catechist, teacher, evangelizer and tireless servant, both in action and in prayer", said during his homily Mgr. Martínez, Bishop of Villarrica, birthplace of the blessed. The Bishop asked for the intercession of "Chiquitunga" to obtain the release of the three people kidnapped in the north of the country by the guerrillas and of whom nothing is known, including the former president of the country Óscar Denis (see Fides, 13/9/2021). Pope Francis, in a letter to Mgr. Valenzuela sent through Cardinal Pietro Parolín, addressed a greeting to Paraguayan Catholics on the occasion of the return of the relics. After mass, the urns were placed in firefighters' car, which took them to the Carmelite monastery, escorted by motorcyclists from the State Police and a caravan of faithful. After half an hour the relics reached their destination, about 14 kilometers from the airport, greeted with applause and music by the army band. Urns were placed in the prepared chapel, along with a portrait of the Blessed, then the Paraguayan national anthem was performed. The process of beatification and canonization of the Blessed began in 1997. In March 2010, Pope Benedict XVI declared her venerable. In 2018 the Congregation for the Causes of Saints approved a miracle operated through the intercession of Chiquitunga and in March of that year Pope Francis authorized her beatification, which was celebrated on June 23, 2018 in Asuncion. (CE) (Agenzia Fides, 23/9/2021) 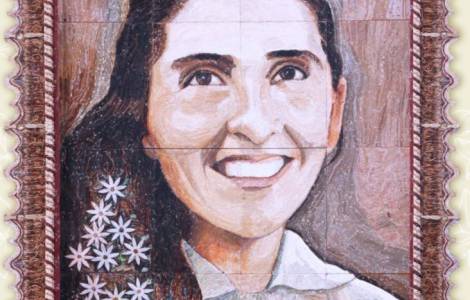