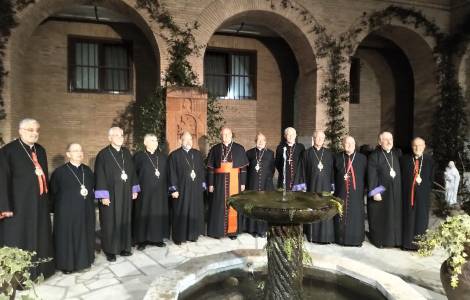 Rome (Agenzia Fides) - "Each of us is summoned in these days as the disciples of Jesus after the Resurrection, in Galilee, the place of the first call and discipleship, because through you and your choices the Patriarchal Church of Cilicia of Armenians may experience a new beginning". Thus Cardinal Leonardo Sandri, Prefect of the Congregation for the Oriental Churches, addressed the bishops of the Armenian Catholic Church during the Divine Liturgy celebrated in the late afternoon of Monday, September 20 in Rome, at the Pontifical Armenian College "in Urbe", to invoke the assistance of the Holy Spirit on the work of the upcoming elective synod convened in the Eternal City by Pope Francis to choose the new Patriarch, successor of Krikor Bedros XX Ghabroyan, who passed away on May 25th.

The Armenian Catholic bishops, as reported by Fides (see Fides, 7/7/2021 and 28/8/2021), had already taken part in a Synod for the meeting of the new Patriarch convened at the Lebanese convent of Our Mother of Bzommar which started last June 22. The meetings of that Synod, however, ended without success. In fifteen meeting days, no candidate had obtained two thirds of the votes of the 12 bishops participating in the Synod, the threshold required for the election of the new Patriarch. At that point, according to what is established by the Code of Canons of the Eastern Churches, the sessions of the elective Synod had been interrupted, and the matter had been referred to the Pope, who summoned the Armenian Catholic bishops to Rome to participate in a new elective Synod hosted at the Pontifical Armenian College of Rome, under the presidency of Cardinal Sandri, at the head of the Vatican Dicastery for the Oriental Churches.
The Divine Liturgy which took place on Monday, September 20 at the Pontifical Armenian College was presided over by Boutros Marayati, Archbishop of Aleppo and Administrator of the Patriarchal Church, and was concelebrated by all the bishops participating in the Synod who had already arrived in Rome. In the homily delivered during the Eucharistic celebration, Cardinal Sandri indicated with efficient words the horizon in which the Armenian Catholic bishops are called to exercise their ecclesial responsibility, choosing a new Patriarch to lead the Patriarchal Church of Cilicia of the Armenians.
"Let's start", said the Argentine Cardinal among other things, "by celebrating the Divine Liturgy, and we will continue to nourish ourselves with the Sacrament of the altar in these days, saying with a concrete gesture the primacy that we must and want to give to Christ, overcoming all logic, thought or human alignment.
We cannot ignore that these dimensions exist, and it would be hypocritical to deny them, but we are called to ask ourselves how capable we are of letting our reasoning transform by placing them before the light of Christ. We" continued the Prefect of the Congregation for the Oriental Churches "believe that on the altar, through the action of the Holy Spirit in the Church, the elements of the earth, such as bread and wine, are assumed and transformed, becoming the presence of Jesus, who died and Rose for us. Yet, we who are constituted ministers of the Eucharist, who invoke the outpouring of the Spirit of consecration in the epiclesis, sometimes run the risk of placing limits on the Paraclete, keeping in ourselves, in our hearts or in our judgment of others as gray areas where the only criterion is personal or, worse, that of the spirit of the world".
Citing the invocations of St. Gregory of Narek, the son of Armenian Christianity proclaimed a Doctor of the Church by Pope Francis, "who does not cease in his writings to invoke the Lord starting from the experience of darkness and sin", Cardinal Sandri recalled the Armenian bishops to take charge with their choices of the intimate spiritual and pastoral urgencies that mark the life of the Armenian Catholic communities scattered throughout the world: "The Church of Cilicia of the Armenians" said among other things the Cardinal "knows that its faithful are now present in almost all continents: the sufferings of the past and present, the search for a stable and safe home, the escape from the powers that have undermined their life led them to disperse. They need pastors who lead them, know how to call them by name as the good shepherd described in the Gospel does". For this reason "the new Patriarch must not only be Caput et Pater by traditional definition. Head only to the extent that he can become a servant, Father because he will feel the responsibility for all his children". In making their choices - Cardinal Sandri confided - the Armenian Catholic Bishops and also the future Patriarch will be able to find inspiration and comfort in the richness of its own Tradition, bearing in mind that "the Armenian people know the experience of violence and persecution very closely, but no power or human strength has been able to eliminate the name of Christ from their lips".
A note from the Congregation for the Oriental Churches, sent to Fides, reports that today, Tuesday, September 21 and in the morning of Wednesday, September 22, the participants in the Synod will take part in a spiritual retreat, with meditations dictated by Cardinal Angelo De Donatis, Vicar of His Holiness for the Diocese of Rome. Then, starting from Wednesday afternoon, Cardinal Sandri will open the elective session, which he will preside over in the name of Pope Francis, according to the legislation approved by the Bishop of Rome himself, to ensure a positive outcome for the elective assembly. (GV) (Agenzia Fides, 21/9/2021)