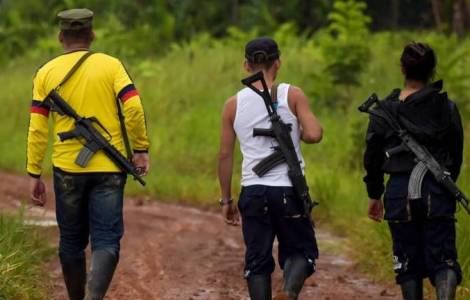 2021-10-11
The release of Sister Gloria, a moment of joy long awaited by the Church in Colombia

2021-09-24
The kerygma as the central point of evangelization

2021-09-17
"The cry of the communities has not been heard, violations of human rights increase": new appeals for Chocó

2021-09-07
The imprisonment of Sister Gloria Cecilia Narvaez: testimony of the evangelizing mission

Cali (Agenzia Fides) - "We join the concerns and appeals that the Church and ethnic and territorial organizations have launched at various times. The dramatic reality that the indigenous and Afro-descendant communities located in the San Juan River basin live today is similar to that experienced by thousands of people throughout the department of Chocó and in the departments of Cauca, Nariño and Valle". These are the expressions of solidarity of the Bishops of the Pacific coast and south-west of Colombia, with the Church of Istmina-Tadó and its communities, victims of the worsening of the armed conflict and of the humanitarian crisis that the region of Chocó have been living.
Both the Church and human rights organizations have in the past made several reports of the situation, a consequence of the abandonment of the State and the criminal actions of armed groups. "Unfortunately, the cry of the communities has not been heard and, consequently, the violations of human rights and international humanitarian law, instead of decreasing, are intensifying", the Bishops affirm in their communiqué sent to Fides. "We ask once again to the Colombian State to undertake relevant and global actions to guarantee the life and dignity of the affected population", they write, urging the armed protagonists to respect the civilian population and "to stop the deplorable actions that have disturbed the traditionally peaceful life of the ethnic communities". The Bishops call on Colombian Catholics to "pray for the peace in the territory and to act with sensitivity in solidarity with the brothers who suffer from war, hunger and abandonment".
In recent days, the Bishop of Istmina-Tadó, Monsignor Mario de Jesús Álvarez Gómez, on behalf of the entire community, once again drew attention to the increase in violence and displacement that the communities of the Municipality of Medio San Juan are suffering, due to the clashes between different armed groups for territorial control. The Bishop urged the protagonists of the armed struggle to respect international humanitarian law, "avoiding, among other things, the involvement of the civilian population in situations where people's lives are at risk".
In the difficult circumstances experienced in the Chocó region, the Church continues to closely accompany the communities most affected, emphasizes the Bishop, who continues: "we continue to bet on the Pact for Life and Peace, and on the Humanitarian Agreement Now, for our communities of Chocó. All those who, with love and sacrifice, work for peace according to the teachings of the Gospel and the guidelines of the Church, will have our determined and timely support".
Finally, Monsignor Álvarez reiterates the support of the Church for all the initiatives for peace in Choco, undertaken by the authorities at all levels and by national and international organizations, asking for the help of all those who can, to join forces to accompany the ethnic-territorial organizations in this common commitment. Monsignor Luis José Rueda, Archbishop of Bogotá and President of the Episcopal Conference of Colombia, also sent a message of closeness and solidarity to Monsignor Álvarez Gómez, expressing sorrow for the sufferings of the communities of Chocó, assuring his prayers that "the Lord may grant the the only true peace, which is the peace of the kingdom of God, the peace of the Son and of God the Father. Courage, we are with you and with your community!". (SL) (Agenzia Fides, 17/9/2021)