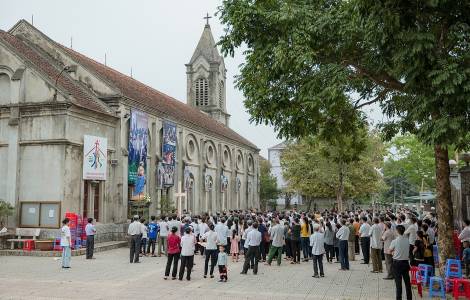 Friborg (Agenzia Fides) - With the slogan "To be silent? Impossible!" Missio Switzerland, the Pontifical Mission Societies of Switzerland, present the Church of Vietnam during the Universal 2021 Missionary Month of October. This Church testifies to the Gospel more with deeds than with words, underlines the note from Missio sent to Fides.
A charisma that is all the more exemplary since the government offers little public space to the Catholic Church. The verse “It is impossible for us not to speak about what we have seen and heard” of the Acts of the Apostles (4:20) inspired the motto of this year's Missionary Month.
"Peter and John must justify themselves before the authorities of Jerusalem for having publicly proclaimed the resurrection of Jesus. But it is 'impossible' for them to remain silent. Like the apostles Peter and John, the Church of Vietnam has never been silent", explains Martin Brunner-Artho, National Director of Missio.
The Catholic Church in Vietnam has a very troubled history, the beginnings of which date back to the mid-16th century. Just under 7% of the population is Catholic, or about 7 million people. The Church of Vietnam is marked by the separation of the Country, a long war, the exodus of a large part of the population and the repression of the communist government. "The Church is free to manage its internal affairs, because freedom of religion and belief is enshrined in the Country's Constitution. But it still has to act with caution on the outside, as it is monitored by the Vietnamese government", adds Martin Brunner-Artho. Parishes and religious orders are very active in the care of internal migrants and are involved in kindergartens. On the other hand, the Catholic Church does not have the right to have its own schools or hospitals.
During the pandemic, many parishes distinguished themselves by supporting families in need, the elderly and the sick, by running soup kitchens for the poor and offering free medical care.
Like many other local Churches, the Vietnamese Church also thrives on universal fundraising, which dropped dramatically during the Covid-19 pandemic. Pastoral and social works have become difficult because the measures to combat the pandemic have paralyzed public and ecclesial life. Many Catholics therefore depend on aid from the Universal Church's Solidarity Fund, both in Vietnam and in the rest of the world. "The collection of solidarity organized around the world on the occasion of Universal Mission Day - which will take place on October 24, 2021 - is a sign that we consider the populations of Latin America, Africa, Asia and Oceania, as our brothers and sisters in faith. With this fundraiser we strengthen their work. We also give them a strong signal: we do not abandon them, neither materially nor spiritually", concludes the Director of Missio. (SL) (Agenzia Fides, 16/9/2021)