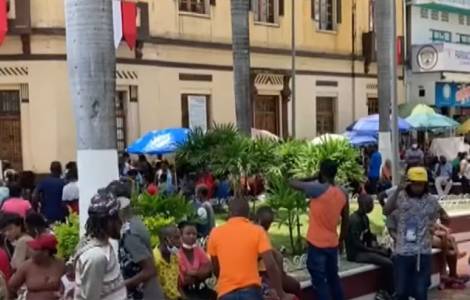 2021-09-06
Human dignity and fundamental rights are not a matter of votes, but of recognition and respect

Tapachula (Agenzia Fides) - Hundreds of migrants in the southern Mexican state of Chiapas protested yesterday, September 15, against the country's immigration policies, which thwarted their efforts to travel to the United States. Many of the Latin American migrants, including a large Haitian contingent, have been stranded for months in the Mexican city of Tapachula, near the Guatemalan border, complaining that authorities have prevented them from passing through Mexico. "We are not criminals, we are international workers", the migrants shouted during the march, which unfortunately recorded episodes of violence and clashes with the police. Many of the Haitian migrants had come from Brazil and Chile, two countries they fled to long ago to avoid poverty in Haiti. The Caribbean island is the poorest nation in the Americas and its economy has been further affected by earthquakes, the coronavirus pandemic and political unrest. The influx of migrants overwhelmed Tapachula and the local migration infrastructure. Thousands of migrants can be seen sleeping outdoors on the streets. On this dramatic situation, Fides received a reflection from Mgr. Jaime Calderón Calderón, Bishop of the diocese of Tapachula, who wrote: "Last Sunday I reflected on the violence suffered by migrants who, organized in caravans, wanted to leave the city. It is evident that there are many unheard cries, both from migrants stranded throughout the city, and from ours, those who reside in this beautiful land. I believe that not only the migrants are not being listened to, but neither are the people of Tapachula. This is noticeable, because there is a big social debt with these populations, and I see it in many delays such as: poverty, education, health, unemployment, precariousness, lack of job opportunities and being able to lead a more dignified life ... to mention only the fundamental ones. Unfortunately, these are the cries of an entire community that is getting tired, that is upset that Tapachula has been turned into a kind of dam ... with so many migrants here relegated and not cared for. I think a whole city is collapsing. It is clear that the institutions are overwhelmed and the government is not sure what to do to get out of this crisis".
Mgr. Calderón recalls that the example of the people of Tapachula, together with the Catholic Church, can help in the immediate future: "We have seen it very clearly in the supportive care that was given to the great caravans of 2018. Furthermore, I dare to say that it is not only the Catholic Church, but that the vast majority of the people of Chiapas are very noble, warm and generous, even in their poverty. For its part, the family of the Catholic Church helps specifically through the Diocesan Reception House and all the hostels of the parishes that are located along the coast. Usually they try to assist migrants in transit with food and shelter, so that they can rest and be safer and, if they need it, provide them health care". Today, September 16, Mexico's national holiday, civil demonstrations in Tapachula will be behind closed doors to avoid further clashes with migrants and for health protocols due to the pandemic that still causes infections in this area of Mexico. (CE) (Agenzia Fides, 16/9/2021)