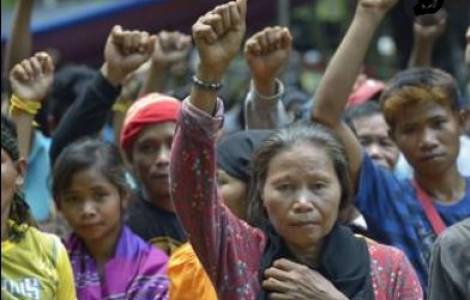 Manila (Agenzia Fides) - "It is like being in the valley of death: the killing of drug addicts and opponents; victims of the pandemic; death from hardship due to a visionless government and blatant corruption that seems to break all records": this is the strong denunciation of three Filipino Archbishops from the North Luzon region, who condemn the killings and inaction of the government in the Philippines.
In a joint pastoral letter, Archbishop Marlo M. Peralta, Archbishop of Nueva Segovia, Archbishop Socrates B. Villegas, Archbishop of Lingayen-Dagupan and Archbishop Ricardo L. Baccay of Tuguegarao, note with pain and concern the huge loss of life in the Philippines, caused by various phenomena such as the "war on drugs", the pandemic, corruption.
"In the last five years - highlights the Letter - more than thirty thousand Filipinos have been killed in the campaign against illegal drugs". Furthermore, the trail left by death is wide: "Journalists, political opponents, judges, priests have been assassinated and government critics have been intimidated and threatened. The murderers are on the loose and the supporters of these murderers applaud them".
The Bishops add: "The pandemic has been a natural disaster that we have not been able to control. We have seen death in our homes and offices. Heroic health workers have risked their lives and some have died. As other nations have recovered from the pandemic, our death toll continues to rise. As a result of the pandemic, the poor are slowly dying from unemployment, hardship and lack of livelihoods. "The poor are paying for the corruption of the powerful. The nation is sinking into debt", the prelates point out, highlighting the incompetence, ineptitude and corruption that "are killing the nation and the economy".
In such a dramatic situation, hope comes from God: "We will overcome evil with the power of good. Our help comes from the Lord", they affirm. The current situation in the Philippines, they argue, requires penance and atonement for personal and community sins: "We can organize penitential rosaries and prayers of reparation to Divine Mercy so that the Lord forgives the murderers. May our penance lead us, in our small way, to generous and courageous works of mercy and charity", underline the Prelates.
The three leaders of the church urged citizens to respect the law, but above all their consciences enlightened by faith: "We must resist a murderous and corrupt public order, letting ourselves be guided by the Compendium of the Social Doctrine of the Church which in n. 400 admits resistance to authority as legitimate when it seriously or repeatedly violates the essential principles of natural law". Citing Saint Thomas Aquinas, the Bishops affirm that "natural law is the basis of the right to resistance". "Non-violent resistance, with peaceful assemblies of dissent or sober debates on social issues, guided by the Gospel, or demonstrations for honesty and heroism, is the path we must always choose. This is the only morally acceptable resistance", reads the Letter." We have a moral duty to resist and correct the culture of murder and looting as well as the constant habit of hiding or destroying the truth", the authors reiterate. The text of the letter also calls for "a full investigation into episodes of corruption" and reject the attitude of "those who obstruct the legal process aimed at truth and justice". Given that general and local elections in the Philippines are scheduled for May 9, 2022, the Bishops affirm: "Free elections that allow the choice and change of representatives are the most effective way to hold political authority accountable. In this spirit, we ask our young people and new voters to register. We appeal to the patriotic sense of the candidates so that they reintroduce ethics in our political life and act according to their conscience, not according to the polls". The letter concludes: "This is not the time for despair, but for courage. This is not the time to be silent, but to defend God. Against the wave of assassinations and looting, let us bear witness to the truth and to life". (SD-PA) (Agenzia Fides, 16/9/2021)