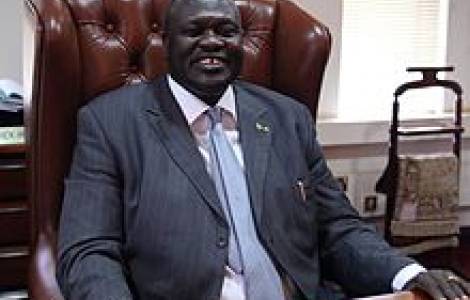 Juba (Agenzia Fides) - At least 20 soldiers were killed on September 13 during new clashes between rival factions of the Sudanese People's Liberation Army/Opposition Movement (SPLM-IO), the main opposition group in South Sudan, led by first vice president Riek Machar. The clash took place in the Morjala and Gazal region of Upper Nil. Already on August 7 and 8, fighting broke out between SPLM-IO factions, after Machar's rivals claimed to have deposed him as head of the party and military forces on August 4.
The clash is between the political wing of the Movement, led by Machar, and the military one, led by Lieutenant General Simon Gatwech Dual, and Brigadier Gen William Gatjiath Deng who accuse Machar of nepotism, dictatorship and having abandoned the vision of the party. In June Machar had tried unsuccessfully to sack Dual from his post as chief of staff.
The struggle within the SPLM-IO has heavy repercussions in the pacification process of South Sudan, which was devastated by the civil war that broke out in December 2013. Under the 2018 peace agreement, which establishes the terms of the transitional government, Machar is specifically appointed as the person in the SPLM-IO charged with serving as first vice president in the transitional government. Within Machar's faction, suspicion has arisen that the internal rebellion of the movement he directed may have been planned by other members of the national unity government to strengthen the position of President Salva Kiir.
Others have indicated the attempted "coup" as a sign of widespread frustration with the government of national unity and the freezing of the implementation of the peace plan. The civil war has so far caused some 400,000 victims, more than 4 million displaced, including 2.5 million refugees in neighboring countries, in particular Uganda and Sudan. On April 11, 2019, at the conclusion of the spiritual retreat, at the Domus Sanctae Marthae in the Vatican, of the political leaders of South Sudan (see Fides, 9/4/2019), Pope Francis knelt in front of them, launching an appeal for peace, kissing the feet of the President of the Republic Salva Kiir Mayardit, and the Vice Presidents-designate present, including Riek Machar and Rebecca Nyandeng De Mabior (see Fides, 12/4/2019). (L.M.) (Agenzia Fides, 15/9/2021)