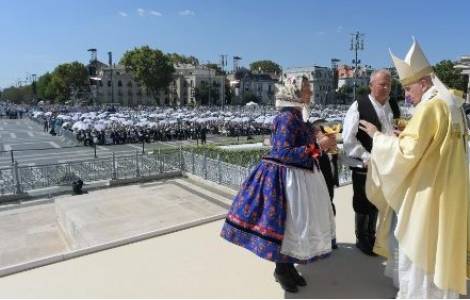 2021-09-13
Pope Francis in Budapest: the Eucharist frees us from false messianisms

2021-09-08
Russian Metropolitan Hilarion: Orthodox and Catholics share the same faith in the real presence of Christ in the Eucharist

Budapest (Agenzia Fides) - The church "comes from the source that is Christ and is sent so that the Gospel, like a river of living water, may reach the aridity of the world and of the heart of man". And the apostolic work can always free itself from the risk "of proclaiming a false messianism, one of human origins, not from God", if it remains suspended in the gestures of salvation carried out by Christ himself in the sacraments, that is, in the work of the One who in the Eucharist offers himself "as broken Bread, as love crucified and bestowed" and "reigns in silence on the cross". Far from the "mighty Messiahs who are venerated by the world", said Pope Francis in his homily delivered on Sunday, September 12th in Budapest, during the closing mass of the 52nd international Eucharistic Congress on the mystery of the Eucharist as a source of every authentic missionary dynamism. Before the Eucharistic celebration, the Pope, in his meeting with the Hungarian bishops, also described the mystery of the Eucharist as a light that illuminates the experiences of martyrdom disseminated along the path of the Church in history. "In the Bread and Wine" of the Eucharist - as the Pope said in the first part of his address to the bishops - we see Christ who offers his Body and his Blood for us. The Church of Hungary, with its long history, marked by unshakable faith, persecutions and the blood of martyrs", the Pope added, "is connected in a special way with the sacrifice of Christ. Many brothers and sisters, many bishops and priests have lived what they celebrated on the altar: they were ground like grains of wheat, so that everyone could be fed by God's love; they were pressed like grapes, so that the blood of Christ could become the lymph of new life; they were broken, but their sacrifice of love was an evangelical seed of rebirth planted in the history of this people".
The Bishop of Rome gave the members of the Hungarian Bishops' Conference some "indications" and encouragement for their mission, which they exercise in a context "in which secularism grows and the thirst for God weakens". Sometimes - said the Pontiff among other things - "when the society around us does not seem to be enthusiastic about our Christian proposal, there is the temptation to turn a blind eye to the defense of institutions and structures", while always bearing in mind that "Structures, institutions and the presence of the Church in society only serve to awaken people's thirst for God and to bring them the living water of the Gospel". "A characteristic sign of an authentic apostolic dynamic", added the Pope, alluding to the isolation that has arisen in Hungary in the face of migration flows, "is the willingness to 'open ourselves to the encounter with the other', instead of closing ourselves in a rigid defense of our so-called identity". The Successor of Peter finally emphasized in this context that "belonging to one's own identity should never be a reason for hostility and contempt for others, but rather an aid in dialogue with other cultures". (GV) (Agenzia Fides, 13/9/2021)