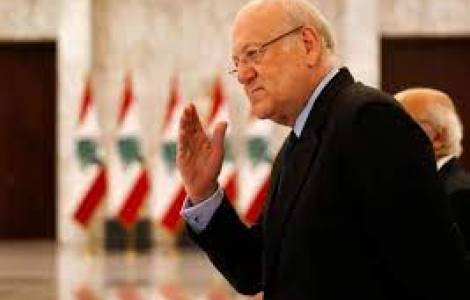 Beirut - Agenzia Fides) - After more than a year of stalemate, Lebanon has a new government. The Sunni Najib Mikati, who since last July 26, had been tasked with forming a new government from President Michel Aoun, after today's prayer went to the presidential palace to present to the Head of State the list of ministers who will be put to the vote of the Parliament to obtain confidence. "The launch of the new government - points out among other things t Maronite priest Rouphael Zgheib, National Director of the Pontifical Mission Societies - could shorten the waiting time for the visit to Lebanon that Pope Francis has 'promised' repeatedly, since the existence of a functioning government in Beirut has always been a prerequisite for a papal visit to the Land of Cedars . According to some indiscretions that have circulated in the Lebanese media in recent hours, the government will be made up of 24 ministers. Half of the ministries will be run by Christian politicians and technicians. The composition of the government team is said to be the result of long and complicated mediation work, aimed at finding a difficult balance between the parties, starting with those that dominate the Lebanese political scene (Free Patriotic Movement, Sunni "Future" Party, the Shiites of Amal and those of Hezbollah). According to the same indiscretions, the acting Prime Minister has chosen ministers in an attempt to save the government structure from the risk of being blocked or undermined by the veto of only one of the political components that will support it. Lebanese analysts contacted by Agenzia Fides define the government announced by Mikati as a "transitional" government, which will above all have the task of defusing social tensions, seeking emergency solutions to the economic crisis, representing an entity capable of interacting with international organizations and lead the country to the next general elections, which should be held in May 2022. At the moment, the requests for systematic protest against the Lebanese political class expressed in the demonstrations that began in autumn 2019, and rekindled by the dramatic explosions in the Port of Beirut (August 4, 2020) and the onset of the economic crisis, do not appear to have found political representation. "In any case" - Father Zgheib points out in a conversation with Agenzia Fides - the formation of the new government, even as a temporary solution, will have to deal with the feeling and forebodings of total dissolution of Lebanon that seem to loom over this time, recalled with alarm last week also by the Synod of Maronite Bishops. In all this - adds Father Zgheib - the formation of a new government could have important implications in relation to the desire to visit Lebanon that Pope Francis has repeatedly expressed. This visit had always been linked to the condition that there was a functioning government in Beirut. Now, the formation of a new government team in Lebanon increases the likelihood that this visit will take place soon. Lebanon is not far from Greece, Malta and Cyprus, which are the destinations of one of the papal trips already announced by the Pope himself". (GV) (Agenzia Fides, 10/9/2021)

AMERICA/MEXICO - The Bishop of Veracruz on migrants: "the position of the Church is to protect and help them while they are in our land"