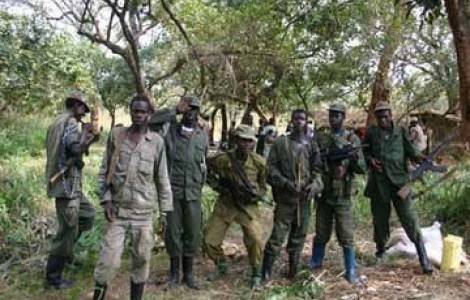 Kinshasa (Agenzia Fides) - The support of neighboring states in the fight against the terrorists of the ADF/MTM (Allied Democratic Forces/Madinat Tawhid wa-l-Muwahidin, a group of Ugandan origin that over the years have come into contact with the Islamic State, says a statement sent to Agenzia Fides, by CEPADHO (Center for Studies for Peace, Democracy and Human Rights), an NGO based in Goma, the capital of North Kivu, which for years has been reporting and denouncing violence against civilians committed by the various armed groups operating in the east of the DRC. "CEPADHO followed with great interest the will expressed by the President of Uganda, Yoweri Kaguta Museveni, on September 8th, to intervene militarily in the operation to combat these terrorists in the Democratic Republic of the Congo, should this be approved by the Congolese state", the Document states. "Our Organization regards this organization as a threat to peace and security in the region and appreciates that neighboring countries recognize the scale of the threat and the need to join the efforts of the FARDC (Armed Forces of the Democratic Republic of the Congo) in the fight against these terrorists elements". CEPADHO emphasizes that one must overcome the distrust between the Congolese and Ugandans. "As a peace organization, CEPADHO considers it inappropriate to continue preaching the eternal hostility between the Democratic Republic of the Congo and Uganda, where synergies are instead required to defeat a common enemy. Knowing that most of the Congolese are in Beni, Butembo and Bunia (in North Kivu and Ituri) to buy their daily groceries and other basic necessities in Uganda, and for roads and fiber optic cables to be built by the two states to the applause of their citizens, it is illogical to continue to suspect or hate each other when the time comes came to fight together against the threat to common security ". Therefore, the Congolese NGO warns: "It cannot be ruled out that those who have an interest in perpetuating violence and terrorism in the east of the Democratic Republic of the Congo may be among those who fought the campaign of hatred, mutual demonization and distrust among the States in the region reinforce because they fear that a synergetic regional or international military action will not put an end to their adventures". In order to investigate the crimes committed in the area, the 2018 Nobel Peace Prize laureate, the Congolese doctor Denis Mukwege, called for the creation of an international criminal court. "Despite the state of siege established in Kivu and Ituri" since the beginning of May, the security situation does not seem to improve in these provinces", says Dr. Mukwege, who called on President Félix Tshisekedi to "ask the United Nations for help and approve a Security Council resolution to launch an investigation to exhume the numerous mass graves in the east of the country and to collect and secure evidence of acts that could constitute war crimes, crimes against humanity and crimes of genocide". (L.M.) (Agenzia Fides, 10/9/2021)