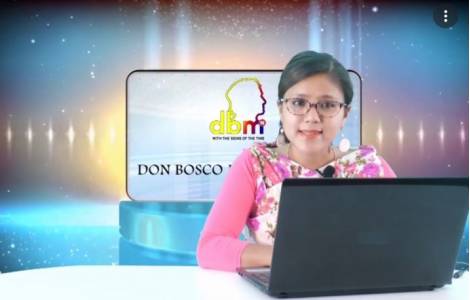 Shillong (Agenzia Fides) - In September a new Catholic cable TV started broadcasting in the State of Meghalaya, in north-eastern India. As Fides learned, the channel is called "Don Bosco Media Network" (DBMN) and is managed by the local community of the Salesians of Don Bosco, and is at the service of the local Church. The television channel started broadcasting with the slogan "The signs of the times", after a year of preparation. The "Don Bosco Media Network" (DBMN) in Meghalaya, in fact, in September 2020 had begun its activities in the field of the apostolate through mass media "to provide hope to society and guarantee information and formation oriented to the Gospel". "Being able to open the television channel is a gift from God and is the fruit of the commitment of many Salesian missionaries and volunteers", notes Fr. Michael Makri, director of the DBMN, expressing his joy. "This work of evangelization will help the faithful to grow in fraternal communion, to form community, to give the Gospel of hope to others", said Fr. Paul O. Lyngkot, Provincial Superior of the Salesians of Shillong. "In fact - continues the Superior - in the midst of the coronavirus pandemic, the negative news circulating and creating depression and despair has increased. The idea of the television channel is to counter this trend, highlighting the good that circulates, giving hope, comfort, the light that comes from Christ", notes Father Lyngkot.
DBMN TV broadcasts a daily bilingual news program in Khasi, the local tribal language, and in English. It also produces and broadcasts youth-oriented programs.
A 10-minute daily newsletter reports stories about the Catholic Church in India and updates on the life of the Salesian missions around the world. Liturgies will be broadcast and programs for reflection, study and entertainment are planned.
Meghalaya is one of the predominantly Christian states in northeastern India. Out of a population of about 3.2 million inhabitants, almost entirely tribal, Christians are about 2.5 million (2018 census). The Roman Catholic, the Presbyterian and the Baptist are the most widespread Christian denominations.
The Catholic Church in Meghalaya (altogether about 900 thousand faithful) is dedicated to the mission among the Khasi and Garo tribal communities of other ethnic groups. From the capital Shillong, the mission began in the whole area of Northeast India, thanks to the presence and work of religious orders such as the Salvatorians, the Jesuits and then the Salesians. (SD-PA) (Agenzia Fides, 9/9/2021)

VATICAN - Mgr. Harrington to the Bishops: "We need to rethink communication, putting the recipients of the message at the center"