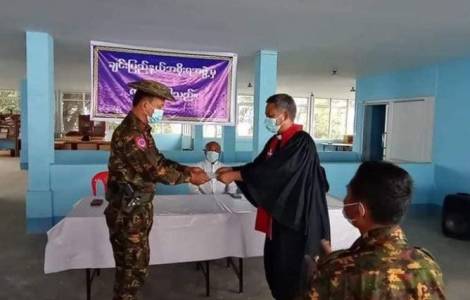 Hakha (Agenzia Fides) - The military junta of Myanmar has made a cash donation to Christian Pastors and Buddhist leaders in all the cities of the Chin State through the commanders of the local army. The military summoned church pastors, parish priests and Buddhist monks to donate them a contribution of 18,000 Burmese kyats (about 11 US dollars), in order to use them in their churches, but almost all religious leaders refused the money. "We do not want to be bought or considered close to the army", a Baptist pastor among the approximately 3,000 Protestant Baptist pastors of Chin state told Fides, asking for anonymity for security reasons. "However, to avoid retaliation against our family or our community, we attended the meeting with the military commanders, politely returned the money offered", he informs. "In recent days - report Fides sources in the diocese of Hakha - the army has sought and compiled a list of religious leaders of churches and monasteries as recipients of the donation, but most of the Christian and Buddhist leaders did not want to provide their own names.
Many religious leaders have stated that instead of donating money, the army should protect religious buildings that have been hit, damaged, seized or devastated" (see Fides, 1/9/2021).
Meanwhile, the Burmese military junta has released the controversial Buddhist monk Ashin Wirathu, known for his anti-Muslim nationalist rhetoric, declaring all charges against him dropped. The monk had been accused of sedition by the previous civilian government of Myanmar. Known for his support for the army, Wirathu has repeatedly delivered hate speeches towards Rohingya Muslims, animating the nationalist-Buddhist "969 Movement". In recent years he had promoted nationalist speeches, criticizing then leader Aung San Suu Kyi and her government of the National League for Democracy. In 2019 he was charged with inciting "hatred and contempt" against the civilian government. He fled, he was arrested by the authorities in November 2020, and was awaiting trial.
At the level of popular resistance, the National Unity Government of Myanmar (NUG), made up of politicians and social leaders in favor of democracy, on September 7th, formalized a "defensive war" against the military junta. "During this popular revolution, all citizens of Myanmar must rebel across the country against the military junta, led by General Min Aung Hlaing", says the NUG. "Months of cruel killings, torture and arrests by the military have passed. Everyone knows about the continuing inhuman acts perpetrated by soldiers when they occupy homes, religious buildings, hospitals and schools", said Duwa Lashi La, an ethnic Kachin politician, currently acting president of the NUG.
The rebel government, which remains loyal to the democratic movement and leader Aung San Suu Kyi, has created its own militias, the People's Defense Forces, to fight the army of Myanmar. In a public message, the NUG calls on soldiers and policemen to desert the official ranks and join the resistance. It also asks for the support of the guerrillas of the different armies that have been fighting Tatmadaw (the Burmese army) for decades for greater self-determination for their regions. The shadow government says it is committed to building a federal democracy that protects all citizens equally. At least 1,046 people lost their lives as a result of violent repression by the army, which fired on those participating in peaceful demonstrations while, according to the Association for the Assistance of Political Prisoners, more than 6,000 opponents are detained. (JZ-PA) (Agenzia Fides, 7/9/2021)