AFRICA/GUINEA - Coup: "Calm situation in Conakry; waiting for the meeting between the coup leaders and the deposed ministers" 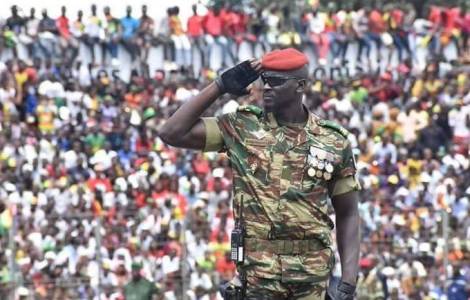 2022-09-03
The path of national reconciliation, led by religious leaders, awaiting the last step

2022-07-20
Archbishop Rugambwa to Bishops of Central Africa: "Bishops should be the mouthpiece and defenders of youth in governments and societies"

Conakry (Agenzia Fides) - "The situation is calm in Conakry. Traffic in the city is normal and people have gone to work like every day", Church from the capital of Guinea sources told Fides, where yesterday, Sunday, September 5, a military coup deposed President Alpha Condé. "At the news of the President's deposition, there were scenes of jubilation in Conakry. The population took to the streets to celebrate", our sources say.
"The military junta called for calm and asked the population to go to work". "The military junta has replaced the ministers with the administrative heads of the various departments, but has convened a conference with the deposed ministers and regional governors at 11 am, local time, in the Parliament building", added the sources. The coup was led by Lieutenant Colonel Mamady Doumbouya, at the head of the Special Forces Group (GFS) of the Guinean army. Doumbouya appeared on national radio and television, RTG, to announce the arrest of Alpha Condé, the dissolution of the institutions and the suspension of the Constitution. The country, he said, will be led by a Comité National du Rassemblement et du Développement (CNRD), made up of military personnel. Furthermore, he justified the coup to end "financial mismanagement, poverty and endemic corruption". On the morning of September 5, the GFS stormed the presidential palace, clashing with the presidential guard. "We do not know if there were victims during the coup and, if so, how many. Rumors have spread about the killing of the Minister of Defense, but there is no confirmation in this regard", Fides sources say. The Special Forces Group, like the presidential guard, is an elite formation of the Guinean army. It was formed around 2018, at the behest of President Condé himself, with the official task of fighting terrorism, but according to independent commentators with the aim of suppressing street riots and uprisings. Mamady Doumbouya, a former soldier in the French Foreign Legion, who was trained not only at the Paris War College, but also in Israel, Senegal and Gabon, has been called to form and lead the new unit. Some interpretations suggest that Doumbouya acted in advance, carrying out the coup to avoid arrest, after the presidential circle began to have suspicions about his ambitions for power. President Alpha Condé, in power since 2010, won elections for a third term in October after changing the Constitution to allow him to run again, sparking violent protests from the opposition. The coup was condemned by several countries. (L.M.) (Agenzia Fides, 6/9/2021)

AFRICA/BURKINA FASO - Uncertainty about a possible coup. Fides sources: "Shooting started at half past four this morning"