AMERICA/MEXICO - The government rejects the reactivation of the migrant protection protocol, which violates the rights of asylum seekers 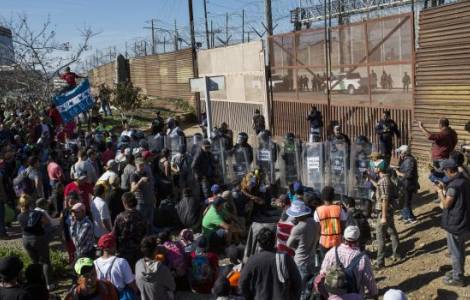 2021-09-06
Human dignity and fundamental rights are not a matter of votes, but of recognition and respect

2021-09-02
The government rejects the reactivation of the migrant protection protocol, which violates the rights of asylum seekers

Mexico City (Agenzia Fides) - "The Government of Mexico must maintain a position that, while respectful, must be firm, clear and of absolute rejection of the intention to reactivate the 'Stay in Mexico' program": is the petition to the President of Mexico, Andres Manuel Lopez Obrador, to the Secretary of Foreign Affairs, Marcelo Ebrard Casaubón, and to the Undersecretary for Human Rights, Population and Religious Affairs, Alejandro Encinas Rodríguez, launched by Mgr. José Guadalupe Torres Campos, Bishop of Ciudad Juárez, and responsible for the Pastoral Care of Human Mobility of the Mexican Episcopate. "With concern we have received the news that it is intended to reactivate the Migrant Protection Protocol (MPP) better known as "Stay in Mexico", derived from the order of the United States Supreme Court", writes the Bishop in the letter, sent to Agenzia Fides.
"We believe that this Protocol on the Protection of Migrants profoundly affects the human rights of asylum seekers. People seeking asylum in the United States are forced to wait for the corresponding resolution at the United States-Mexico border, which places people in situations of vulnerability and dangers that put their lives, physical, emotional and spiritual integrity at risk". The Bishop recognizes "the deep migratory crisis" that is taking place on the southern border of the country, where hundreds of people from the Northern Triangle of Central America and now with a considerable number from Haiti, are waiting for the immigration authorities to resolve their legal situation.
"Overcrowding, the lack of hygiene measures, food, basic supplies, coupled with the slowness in the resolutions of the National Institute of Migration and the Mexican Commission for Aid to Refugees, place people in a vulnerable situation, affecting the exercise of their fundamental rights", observes the bishop. "The reception centers, migrant houses, soup kitchens for migrants are saturated and at the limit of their capacity - he continued. The efforts of local churches, parishes, dioceses, are being exceeded due to the lack of a clear immigration policy, strategic planning and little or no resources from the Federal Government".
Mgr. José Guadalupe Torres Campos also condemns "the repressive, violent and containment of migration behavior on the southern border, particularly in Tapachula"; he urges the competent authorities "to carry out concrete actions to assist people in the context of mobility, and in this way, avoid and prevent human rights violations"; and finally, it demands that the authorities at all levels respect article 11 of the Magna Carta that establishes free transit, "so that those who already have a legal stay in Mexico are allowed to transit through the country in search of options of residence and employment that allows them to live with dignity and access basic services". In the conclusion, the Bishop expresses his particular gratitude to the Local Church of Tapachula "for their expressions of solidarity and humanitarian support with the migrant population, both in Tapachula and along the migratory route that runs through the entire Diocese", with the hope that his example motivates the entire Mexican Church "so that in every corner of Mexico there are communities that welcome, protect, promote and integrate migrants". Finally, he invokes the intercession of God so that he continues to encourage and accompany "all pastoral agents who generously defend and promote the rights of those who suffer the most and reward them for their generosity". (SL) (Agenzia Fides, 2/9/2021)