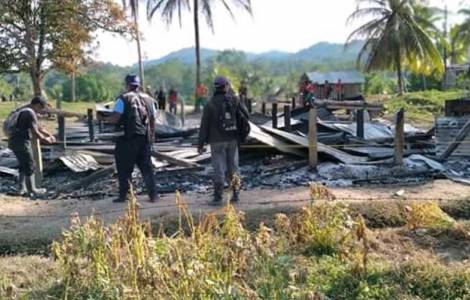 Matagalpa (Agenzia Fides) - "We can, without exclusion, stop, speak, correct, forgive ourselves, on the basis of the fundamental right to truth (...), establish a document that defines the fundamental rules, minimum and non-exclusive, to achieve a 'ocial organization that lives in coexistence and in peace", said Monsignor Rolando Álvarez, Bishop of Matagalpa, launching an appeal for peace last Sunday, August 29, after the murder of a group of indigenous people in the north of the country by the settlers.
On August 27, Nicaragua's civil organization "Gobierno de las Mujeres Mayangnas" reported that at least 18 indigenous people had been murdered on the peaks of a mountain, in the area called Caribe Norte, by alleged "settlers". A few days later, the NGO Articulation of Social Movements confirmed the so-called "indigenous massacre", and set the death toll at 13. Of these, two are women who were also raped. Among the victims there is also a six-year-old boy, eight natives of Miskito and two Mayangna. Both the "Gobierno de las Mujeres Mayangnas" and the Nicaraguan Center for Human Rights (Cenidh) have asked national authorities to investigate the case, but so far there have been no official statements on the reported crime.
"We must dare - said Mgr. Alvarez in his Sunday homily -, let's take up the challenge, write our act of independence, justice, peace, security, and let's put it into practice; only then will we live and take possession of the land that the Lord promises us", the Bishop of Matagalpa reiterated.
According to data gathered by Fides, indigenous peoples of African origin in Nicaragua live in 304 communities established in 23 territories, the majority in the poorest and most isolated areas of the country. The Center for Justice and International Law (Cejil), which has investigated the killings of indigenous peoples in Nicaragua, has sounded the alarm as these populations risk being exterminated due to the constant invasion of their territories. (CE) (Agenzia Fides, 2/9/2021)