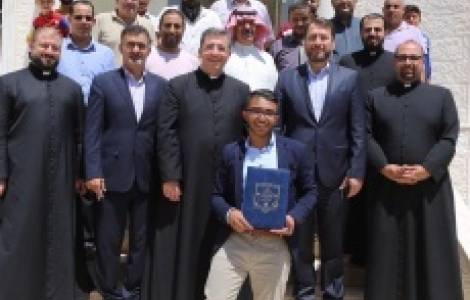 2022-05-25
76th anniversary of National Independence: the Churches renew their certificates of loyalty to the Hashemite Dynasty

Madaba (Agenzia Fides) - Also in August this year, the Jordanian Ministry of Education announced the results of the general secondary school exams - also known as "Tawjihi" exams - for the 2020/2021 academic year. And as is tradition, the students of the schools of the Latin Patriarchate of Jerusalem again achieved excellent results this year, which underlines the importance of the contribution of Catholic educational institutions to the Jordanian school system.
The number of students who took the Tawjihi exams this year was 185,806, of whom about 113,000 passed the exams. Of the 37 candidates who achieved the best results, more than half were girls.
In the schools of the Latin Patriarchate in Jubeiha, 100% of the candidates successfully passed the exam. The same percentage occurred for the students who attended the science classes in the patriarchal schools of Madaba and Fuheis. The boys' school of the Latin Patriarchate of Madaba took first place in Jordan with a success rate of 99.75%. One student at the school, Ahmad Fayez Al-Ajalin, was the best student in the science branch in the entire kingdom. On Saturday, August 21, Wisam Mansour, director of the schools of the Latin Patriarchate in Jordan, visited the family of young Ahmed (see photo) to congratulate the student and a letter of congratulations signed by the Latin Patriarch of Jerusalem, Archbishop Pierbattista Pizzaballa on the results achieved by him and the entire school in Madaba.
The goals achieved by the schools of the Latin Patriarchate, even with the restrictions of the pandemic, confirm the vitality and solidity of a Christian educational offer that has long made a concrete contribution to the human and spiritual growth of the majority Muslim population on site. A mission that has always been realized thanks to the contribution of the Order of the Holy Sepulcher.
In 2019, the Catholic schools of the Latin Patriarchate of Jerusalem celebrated their 150th anniversary in Jordan. On this occasion, Father Wissam Mansour explained that around 11,000 Christian and Muslim pupils are taught in the 25 schools and 18 kindergartens of the Latin Patriarchate in Jordan.
The first Catholic school in the territory of present-day Jordan was founded in the city of Salt by Fr. Alessandro Macagno, the legendary Abuna Skandar, who preached the Gospel among the Christian Bedouin tribes in Jordan by living in tents like them and taking with him a mobile altar for the celebration of the Eucharist. At that time the Ottoman governor did not want to grant permission, but it was the locals, Christians and Muslims together, who overcame the resistance. Even the Muslim Bedouins had understood that they could only expect good things from the man who taught them to read and write.
In the second half of the 19th century, the newly established Latin Patriarchate of Jerusalem established schools across Jordan as the first schools to emerge in a self-contained society shaped by tribal social practices. The education offered there indiscriminately to everyone - Christians and Muslims, poor and rich, people from the north and the south - was the key to apostolic witness in rural or desert areas that had not seen Catholic pastoral initiative for centuries.
When the Hashemite Kingdom of Jordan was founded, the school network of the Latin Patriarchate - which was already flanked by the large colleges opened by Catholic religious orders in Amman - was the only "indigenous" education system. (GV) (Agenzia Fides, 25/8/2021)