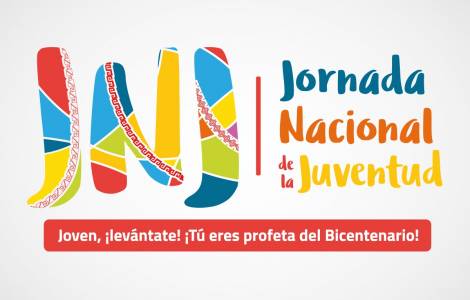 2021-11-08
The Church for the Bicentenary: the participation of the Church in independence and nation building

Lima (Agenzia Fides) - "Young people, stand up! You are the prophets of the bicentenary" is the motto of the first National Youth Day, which Peru will celebrate from November 19-21. The event is dedicated to the celebrations of the 200th anniversary of the country's independence on July 28th. According to the communication from the Episcopal Conference, the day is being organized by the Episcopal Commission for Youth and Laity, chaired by Alfredo Vizcarra, Bishop of the Vicariate of Jaén, with the aim of "highlighting the importance of the country's youth in the light of the bicentenary of independence" from Spain.
Since the beginning of 2021, several working groups have been formed, each dedicated to the various aspects of the event: liturgy, spirituality, communication. The logo of the event consists of three large letters "JNJ", the initials of "Jornada Nacional de la Juventud" (National Youth Day), painted with particularly bright and lively colors, to indicate the joy and the spirit of celebration that animates the meeting, and the motto “Joven, ¡levántate! ¡Tú eres profeta del bicentenario!". The hymn and prayer for the meeting, on the other hand, were chosen thanks to a competition between Catholic artists, won by José Luis Vallejos Arias, author of the hymn, and Eddy Alex Juárez Vergara, author of the prayer. Both of their compositions refer to the figure of Saint Rosa of Lima, Patroness of Peru.
The saint was born in Lima on April 20, 1586, in a noble family of Spanish origin, she was baptized with the name Isabella. A loving domestic servant, of Indian origin, was impressed by the beauty of her child and gave her the name of a flower, Rosa, which will remain with her forever. When her family suffered a financial collapse, Rosa rolled up her sleeves and helped around the house. From a young age she strived for a life in a monastery and had as Saint Catherine of Siena as a model. Like her, she entered the Third Order of Dominican at the age of twenty. In her mother's house, she set up a kind of home for the needy, where she looked after abandoned children and the elderly, especially of Indian origin. From 1609 she locked herself in a two-square-meter cell in the garden of the house, where she spent most of her days in prayer. She had mystical visions. In 1614 she was forced by her family to move into the house of the noblewoman Maria de Ezategui, where she died three years later on August 24, 1617. She was beatified in 1668 and canonized on April 12, 1671, the first saint of the South American continent. She is the main patroness of the Americas, the Philippines and the West Indies.
The Episcopal Commission for young people and the laity has organized a series of activities that should begin on the 19th of each month, the day the National Youth Day begins on November 19th. Three chapters of the Spiritual Aid will be launched for the months of August, September and October. According to Álvaro Salazar, Executive Secretary of the Episcopal Commission, the tools provided are intended to enable participants to prepare our hearts and our spirits to reflect on our reality before the month of November. "The Youth Day should then enable us to find out what the youth of Peru want for the future of the country in view of the bicentenary", concluded Álvaro Salazar. (SL) (Agenzia Fides, 19/8/2021)

AMERICA/PARAGUAY - Young people gathered in Caacupé: "We are the today of God and of the Country, today we must participate, commit ourselves and act"