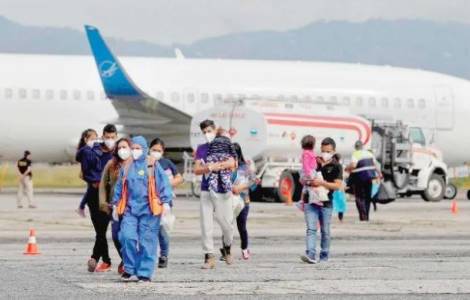 2021-07-20
Bishops' solidarity with the Cuban people: may our countries grow in friendship, justice and peace

Washington (Agenzia Fides) - The U.S. Department of Homeland Security (DHS) announced that it will be placing certain migrant families in expedited removal proceedings, a process whereby immigration officers can quickly, and absent a hearing, deport noncitizens suspected of recently entering the United States without inspection.
In response to these events, Bishop Mario E. Dorsonville, auxiliary bishop of Washington and chairman of the U.S. Conference of Catholic Bishops’ Committee on Migration, issued the following statement:
"In February, we welcomed Executive Orders signed by the President related to removing barriers and restoring due process in the legal immigration system. Strong due process is vital for the rule of law to thrive in accordance with the common good, and we cannot have a ‘fair, orderly, and humane’ immigration system without robust due process protections.
Therefore, we call on the Administration to reverse course on its expanded use of expedited removal, reexamine its use of Title 42 authorities, and truly promote due process, consistent with past commitments. We also renew the appeal I made in April with my brother bishops from along the U.S.-Mexico border, echoing Pope Francis: let us work together as a nation to welcome, protect, promote, and integrate migrants according to their God-given dignity. Mindful of public health concerns, we encourage policies supported by sound scientific rationales and oppose those with a disparate impact on families, children, and other vulnerable populations. Finally, we praise recent efforts by the Administration to expand vaccination access for migrants, which is critical to limiting the spread of COVID-19". The statement concludes with a prayer:
"In this Year of Saint Joseph, we pray for the patron of families to intercede on behalf of vulnerable migrant families, especially those traveling with children and the elderly".
Title 42 expulsions are US government removals of people from the United States government of people who have recently been to a country where there was a contagious disease. The extent of authority for contagion-related expulsions is established by law in 42 USC § 265. During the COVID-19 pandemic, the Trump administration used this provision (section 265) to generally block the entry of many migrants. The Biden administration decided to continue along this line.
Since July 30, the United States Department of Homeland Security (DHS) has begun a repatriation program for Salvadorans, Hondurans and Guatemalans with the implementation of expedited deportation flights.
It is widely believed that the use of this procedure undermines fair process and prevents access to the protections guaranteed by both domestic and international law.
According to statistics from the US Department of Homeland Security, as of June 2021, 62,309 Salvadorans reached the southern border of the United States. (CE) (Agenzia Fides, 9/8/2021)

AMERICA/HONDURAS - The Bishops: "May the elected authorities working for the common good project Honduras towards a prosperous future and integral well-being for all"