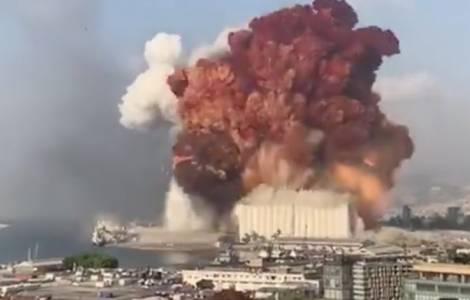 2021-08-30
"Every time a Lebanese emigrates, we lose our battle". Patriarch Rai raises the alarm about migratory "haemorrhage"

Beirut (Agenzia Fides) - "We are worried that the situation could degenerate", local sources from Beirut tell Fides, where the explosion of the ammonium nitrate store is being commemorated today, which hit the Lebanese capital on August 4, 2020 a year ago. "The population has been invited to go to the port to demand truth and justice", the sources say. "The wound is still open, especially since the presidential office promised immediately after the tragedy that those responsible for the event would be determined immediately. But after a year nothing has happened in this regard".
The only news worth mentioning is that an FBI investigation revealed that around 400 to 500 tons of nitrate exploded, a fraction of the 2,700 tons that were stored in the port warehouse at the time of the explosion.
"People are wondering where the remaining 2,000 tons went and whether the tragedy had anything to do with the disappearance of that huge amount of nitrate. Ammonium nitrate can be used as fertilizer or as an explosive, and there is speculation that the one that disappeared from Beirut
may have ended up in Syria, where the war is not yet over".
Since August 4, 2020, the population has been demanding the truth in order to obtain justice, but the political class seems to want to prevent the investigation. Port managers have been accused, but the judges who are investigating are facing an insurmountable wall when it comes to investigating political responsibilities for not lifting parliamentary immunity from MPs and ministers", the sources say.
"The situation is explosive because people's frustration at the lack of truth adds to the suffering of a population already suffering from the severe economic crisis that has only worsened over the past year", the sources say. "Inflation has reached a level reminiscent of that of the Weimar Republic in Germany in the 1920s: You can buy a little meat and some other groceries for a million Lebanese lira. There is a shortage of gasoline, oil and sometimes even bread. The black market determines prices. The dollar has risen from 18,000 to 23,000 lira in a short period of time. In a country that imports almost everything, this is a tragedy. Especially for the sick, especially the chronically ill. Medicines are scarce, but can be bought on the black market at outrageous prices. For example, a drug that used to cost 6 / 7,000 lire now costs 180,000 lire. Even the soldiers are hungry and only survive thanks to the help of some foreign Arab and non-Arab States".
"Catholic NGOs, starting with Caritas, above all Caritas, are doing a lot to help the population, especially in the area of food supply", the sources emphasize. "But the lack of a government that donor countries can rely on prevents them from trying to find a solution to the crisis. And when people have little to eat, there are unfortunately many weapons. And nothing is excluded today", conclude our sources (L.M.) (Agenzia Fides, 4/8/2021)

AMERICA/BRAZIL - Catholic Church Action Week: More than half of Brazilian families are affected by food insecurity