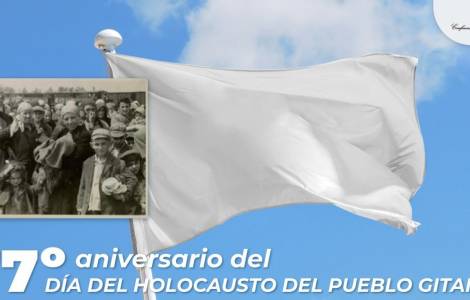 2022-05-16
"Protection, defense and care of life, not its destruction": decriminalization of assisted suicide approved

2022-05-03
The Bishops for the Day of Reconciliation: "let us continue the commitment to be artisans of forgiveness, reconciliation and peace"

2022-04-20
Violence in Arauca even at Easter: four people killed, including two children

2022-04-01
Catholic Church and United Nations in Arauca: dialogue and processes to support victims are needed

2022-03-25
Attacks on religious freedom and freedom of worship 'deplorable and unacceptable', bishops call for dialogue

Bogota (Agenzia Fides) - "The Colombian Church, through the Episcopal Conference, wishes to express its deepest sense of solidarity with the Roma peoples around the world and in particular with the Roma who have lived in Colombia for several centuries; taking advantage of the commemoration of the genocide perpetrated by the Nazi Reich during the Second World War", declares the Episcopal Conference of Colombia (CEC), in a note from its Department of Missionary Animation and for Ethnic Groups, on the occasion of the 77th World Holocaust Day of the Roma people, which is celebrated today, August 2.
In the message signed by Fr. Omer Giraldo, director of the Ethnic area, recalled that the Roma population has its origins in the Asian region of Kannauj, in northern India and has been characterized throughout its history by being "a people with a nomadic tendency which also carries within it a firm conviction of freedom, (...) Family ties are an enormous cultural force for this ethnic group, as well as their convictions, their faith in God and the richness of expressions, such as music and dance".
The note sent to Fides by the CEC, underlines that the night of August 2 – 3, 1944 is sadly remembered for the infamous murder of more than 4,300 members of minorities known as Sinti and Rromani, cultural variants of the same ethnic group. This night is called in German "Zigeunernatch", "The night of the gypsies".
In this context, on behalf of the CEC, the religious invites Colombians to become aware of the suffering that the Roma population has had to endure throughout history. In particular, he asks that a special prayer be held this August 2 and that there be spaces for reflection for the attitudes that are often assumed when we get to know these communities settled in the Colombian territories.
"Gypsies have been victims, misunderstood wherever they go. In our country too, Gypsies have suffered discrimination and social marginalization in terms of employment, education and health. A very positive fact that has marked the fate of the Roma peoples in Colombia is their recognition by the Colombian state as an ethnic minority, on the basis of the new 1991 Constitution. Colombia's internal war has forced these communities to move to the cities".
According to the priest, there are currently between 5 and 7 thousand gypsies in Colombia, mostly in the two Santanders, Atlántico, Tolima, Antioquia, Sucre and Bogota, organized in clans called Kumpañy. (CE) (Agenzia Fides, 2/8/2021)

AFRICA/NIGERIA - Christian Association of Nigeria: "The State must protect the Bishop of Sokoto"