AFRICA/MADAGASCAR - "No to destabilization and the seizure of power by force", say the Bishops 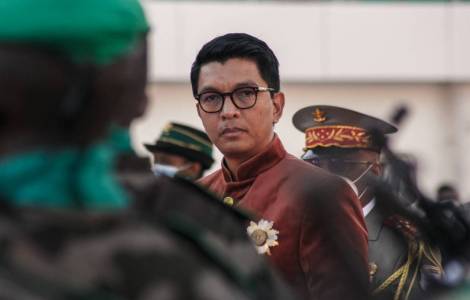 Antananarivo (Agenzia Fides) - "We are against any form of destabilization and seizing power by force", declared His Eminence Cardinal Désiré Tsarahazana, Archbishop of Toamasina and President of the Episcopal Conference of Madagascar, during the meeting with the President of Madagascar, Andry Rajoelina. The delegation of the Catholic Church was received by the Head of State on July 29. The other members of the permanent office of the Bishops' Conference of Madagascar, including its vice-president and secretary general were also present. The Cardinal reaffirmed that the Catholic Church does not engage in politics and that neither bishops nor priests seek to occupy political positions, because politics is neither the mission nor the vocation of men of the Church. "We do not have a candidate for any political office," he reiterated. According to the Malagasy authorities, President Rajoelina was the victim of an assassination attempt that was foiled by the local police with the cooperation of the intelligence services of other countries, including the United States. On July 21, the Attorney General of the Antananarivo Court of Appeal, Berthine Razafiarivony, reported that at least six people had been arrested in connection with the assassination attempt aimed at overthrowing the country's legitimate institutions. Two citizens with dual French and Malagasy nationality are among them, including the alleged organizer of the plot, Paul Maillot Rafanoharana. Rafanoharana, a former French officer of the Special Military School of Saint-Cyr, introduces himself on his LinkedIn profile, as "Advisor to the Archbishop of d'Antananarivo", His Exc. Mons. Odon Marie Arsène Razanakolona, who denied any involvement in this affair. A case whose contours are still confused. A local oil company said it received an email from Rafanoharana asking for 10 million euros and promising, in return, to sign oil contracts being negotiated. According to press sources, the plan of the conspirators was to recruit 15 highly qualified mercenaries to kill the Malagasy president, in an assault reminiscent of that carried out against the president of Haiti, Jovenel Moise, on July 7. 11 gendarmes and other Malagasy officials are also being investigated in connection with the planned attack. Meanwhile, the humanitarian situation in the Big Island is worsening. A joint statement by UNICEF and WFP says at least half a million children under five will be affected by acute malnutrition, including 110,000 in severe conditions, in drought-affected areas in southern Madagascar, with irreversible damage to their growth and development. More than a million people are in conditions of food insecurity in southern Madagascar and the number of people in 'catastrophic' conditions is expected to double to 28,000 by October", the statement said. (L.M.) (Agenzia Fides, 31/7/2021)