AMERICA/COLOMBIA - The Bishops join the cry of "so many brothers and sisters who ask for peace, respect for life and human rights" 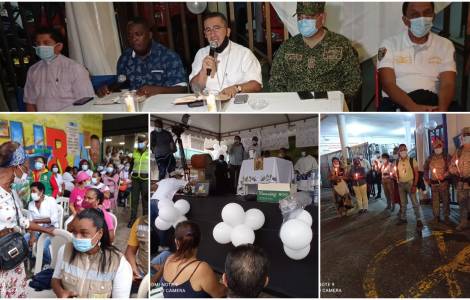 2021-09-17
"The cry of the communities has not been heard, violations of human rights increase": new appeals for Chocó

2021-09-07
The imprisonment of Sister Gloria Cecilia Narvaez: testimony of the evangelizing mission

Bogotà (Agenzia Fides) - "The Catholic Bishops of Colombia support this cry for peace, life and respect for the human dignity of so many of our brothers and sisters", declared the Episcopal Conference of Colombia, expressing its support and solidarity with the bishop of Buenaventura, Monsignor Rubén Darío Jaramillo Montoya, who this week lived the "Day of Life", through religious, cultural and reflection events, the culmination of which ended on July 30 with a march to repudiate violence. Through this initiative, the Diocese of Buenaventura wanted to join the cry of its inhabitants to once again ask for peace and reconciliation for this region plagued by violence and inequalities. "We cannot remain silent", said Monsignor Jaramillo Montoya, in a video message, explaining that this day was called because during the first 20 days of July, there were 24 murders, as well as extortion, theft, disappearances and kidnappings that continue.
From July 26 to 30, various initiatives took place, including the lighting of a candle in homes, which represents the light of Christ, in order to invoke it for families and the city; an inter-religious day through social networks; 1,000 trees were planted as a sign of hope and life; a visit was made to seven vulnerable areas where violence is most prevalent: residents wore white clothes, while white balloons were displayed in their homes and offices, as a sign of peace; there were reflections and cultural and playful moments on the situation of violence faced by the population. Even the Bishops of the Pacific and South-Western Colombia, in a statement, said they would join the cry of the people of Buenaventura who invoke peace and respect for life. "The time is not for indifference", write the Bishops, "the time has come to raise your voice and demand respect for the dignity of human life". We encourage our communities to accompany in prayer the days of peace called in the diocesan sister church of Buenaventura". The Bishops urge those who, through violence, take the lives of so many innocent people to exchange "arms and hatred for tools which forge a healthy coexistence and respect for all citizens". Likewise, they call on local, regional and national authorities to seek means of ensuring the safety of the population and urge them to provide the education and employment opportunities necessary for the communities to realize their life plans. (SL) (Agenzia Fides, 31/7/2021)