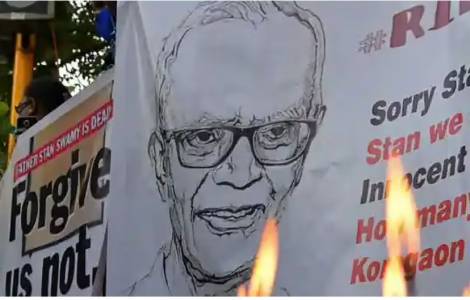 2021-08-26
Violence in Orissa 13 years ago: Christians in Orissa call for justice again on the occasion of the commemoration

2021-07-31
Appointment of the Rector of the "St. John" Regional Philosophical Seminary in Visakhapatnam

New Delhi (Agenzia Fides) - In celebrating the "National Day of Justice", on July 28, Indian citizens of the Christian religion and other faith communities remembered and paid great tribute to Fr. Stan Swamy, the Jesuit, defender of tribals arrested in October 2020 on false accusations of "sedition" and died on July 5 in detention, awaiting trial, in a hospital in Mumbai, western India. The Jesuit spent more than 35 years working for the justice and welfare of the tribals in Jharkhand, eastern India.
The invitation to celebrate the "National Day of Justice" came from Father Stanislaus D'Souza SJ, president of the Jesuit Conference of South Asia and was extended to civil society organizations. "We need to give deep respect to Fr. Stan Swamy and carry forward his legacy. His death is not an end in itself but an "opportunity to reaffirm our faith in our nation’s Constitution", remarks Fr D'Souza in a note sent to Fides. According to the Jesuit, "Father Swamy stands today as an icon of justice for the marginalized. Upon his death, he rose in the hearts of many as a cult figure. Through his permanent accompaniment of the Adivasis, Dalits and marginalized communities, and with his martyrdom, he gave us a new ethical mandate to be compassionate, to be the voice of the voiceless and defenders of human rights". The Day was celebrated in various dioceses of the nation. Following the Covid-19 measures, several lay people, priests and nuns participated in a silent candle light march organized in the State of Madya Pradesh to protest the injustice suffered by Father Swamy.
"Jesuits across the country, together with their collaborators, celebrated "National Day of Justice "with the "stand with Stan", calling for justice and extending their solidarity to those innocent prisoners on trial or arrested without fault", says to Fides Fr. Vinod Sushil Soreng, Jesuit, professor of philosophy. National Day of Justice "must keep the desire to work for the poor and marginalized alive in our hearts", said Cardinal Oswald Gracias, Metropolitan Archbishop of Bombay and President of the Indian Bishops' Conference, who welcomed the proposal of the Jesuits.
During the day, a great tribute was paid to Father Swamy, 84, who died on Juy 5 of multiple ailments blamed on poor treatment of a Covid infection he had contracted during his stay in jail. He was arrested on October 8 last year by the National Investigation Agency (NIA), India's counter-terrorism task force, from his residence in Ranchi, the capital of the eastern Indian state of Jharkhand, for alleged terrorist activities. (SD-PA) (Agenzia Fides, 29/7/2021)