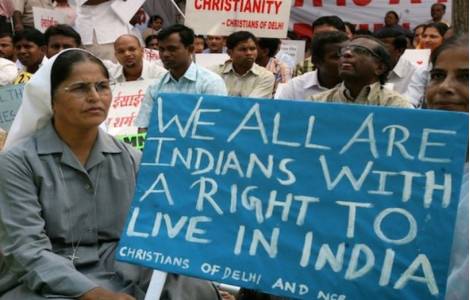 New Delhi (Agenzia Fides) - In the first half of 2021 (from January to June) 145 cases of violence against Christians in India were documented: as reported in a note sent to Agenzia Fides by the Commission for Religious Freedom within the "Evangelical Fellowship of Indian" Religious Liberty Commission"(EFI), among the 145 episodes there are three murders. The cases are presented and documented in the report entitled "Hate and targeted violence against Christians in India - half-yearly report 2021" published on July 23 by the EFI Religious Freedom Commission. "It is disconcerting that the incidents occurred just as the country was again hit by the second wave of the pandemic, which hit, in particular, metropolitan cities including the national capital New Delhi", said in the note Rev. Vijayesh Lal, Secretary General of the Fellowship of India's Religious (EFI).
The detailed violence in the Report sent to Fides refers, among others, to 3 murders, 22 attacks on churches, 20 cases, in rural areas, of ostracism or social boycott of families who had refused to renounce their Christian faith.
Threats to false accusations of conversions follow, such as stories of social exclusion and discrimination on a religious basis. According to the Report, Madhya Pradesh tops the list with 30 cases in terms of geographical spread. The state, which has vast areas of forest land where Adivasis, or tribals live, was among the first to enact "Anti-Conversion Laws". The neighboring state of Uttar Pradesh continued to record 22 cases, while the Karnataka and Chhattisgarh States, also polarized by a decade of religiously divisive political campaigns, report 14 and 13 cases each. The most bizarre incident occurred on March 19, 2021 in Jhansi, Uttar Pradesh, when four Catholic nuns of the Sacred Heart Society were arrested on their way from Delhi to Odisha state. The incident occurred as the train they were traveling on stopped at Jhansi Railway Station. A group of religious extremists, returning from a pilgrimage, accused them of carrying out unauthorized religious conversions. Police arrived at the scene and arrested the women without paying any attention to their side of the story. About 150 members of radical Hindu nationalist organizations accompanied the women in procession to the police station. The terrified nuns were released at 11.30pm after leaders and civil society organizations convinced the police that the nuns were innocent and had credible documents to prove their story, Reverend Lal noted. "Violence against Christians in India derives from a climate of targeted hatred. The translation of hatred into violence is triggered by a sense of impunity generated in the Indian administrative apparatus", says Reverend Lal. COVID-19, which has had a severe impact on data collection, basic investigations and even solidarity with victims in distant villages, appears to have provided the police with a ploy to not register cases - the police have generally been reluctant to recording cases of violence against Christians. Access to the courts for justice was also limited. The violence was also facilitated by the absence of civil society on the streets as activists were unable to travel due to restrictions and blockades due to Covid.
The most alarming development - notes the Report - was the expansion of the infamous "Freedom of Religion Acts", popularly known as "Anti-conversion laws". Previously approved and applied in 7 Indian states, they have now extended to multiple states ruled by the Bharatiya Janata Party. These norms target Christian and Muslim minorities, in the latter case under the pretext of curbing the "Love Jihad". This is a term coined a few years ago to demonize marriages between Muslim men and non-Muslim women, especially those belonging to the Hindu upper castes. The laws apparently punish "forced or fraudulent religious conversions", but in practice they serve to criminalize all conversions, especially in non-urban areas.
Uttar Pradesh became the eighth Indian state to pass an anti-conversion law. Similar laws are in place in the states of Odisha, Madhya Pradesh, Chhattisgarh, Gujarat, Himachal Pradesh, Jharkhand, and Uttarakhand. The states of Arunachal Pradesh and Rajasthan have passed anti-conversion laws that are not in effect for various reasons, while Tamil Nadu has passed and subsequently repealed an anti-conversion law. Christian activists fear that the trend to expand anti-conversion laws is a step towards the law and "to control what is called the proselytism of 'missionaries', to Christianize Dalits, tribals and others in rural areas, small towns and urban slums".
Responding to several petitions, the Supreme Court of India agreed to examine the constitutional validity of the laws enacted by Uttar Pradesh and Uttarakhand, but stated that the laws must first be challenged by the respective state's High Court. Campaigns of nationalist groups linked to the ideology of Hindutva ("Hinduity", which preaches an exclusively Hindu India) are lobbying to present a law against religious conversion in Parliament, to be approved on a federal basis. EFI appeals to the Government of India and their respective state governments to ensure the rule of law and safety of religious minorities in India. (SD-PA) (Agenzia Fides, 27/7/2021)