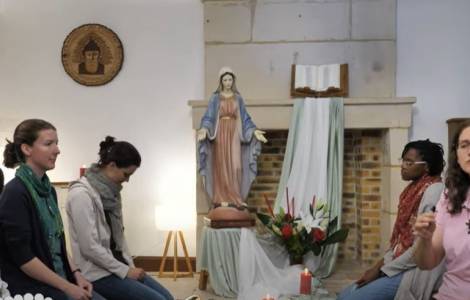 2021-08-30
The Pope: prayer and fasting for Afghanistan; religious congregations ready to welcome refugees

2021-08-28
Father Jeyaraj: "The way to peace is through justice and overcoming inequality"

Vatican City (Agenzia Fides) - "Lord, we consecrate to your heart and to the Heart of Mary, Our Lady of Lebanon, the Lebanese people and our leaders, our families, the suffering, all those in need. Donate to the Lebanese people the grace to live in honesty and transparency, in justice and peace". This is the invocation echoed during the "Rosary for Lebanon" celebrated on July 24, the feast of Saint Charbel, a Lebanese monk, in the chapel of the "International Center for Missionary Animation (CIAM).
"It was an intense moment of prayer, of profound spirituality and spiritual communion in the universal Church. We felt and experienced the unity of hearts, which invoked peace and salvation for Lebanon, turning to the Virgin Mary, thanks to the people present and thanks to more than 11 thousand faithful connected online through the Youtube channel, from the five continents". This is what Father Dinh Anh Nhue Nguyen, OFM COnv, Secretary General of the Pontifical Missionary Union, organizer of the event reports to Agenzia Fides.
Among the approximately 25 faithful gathered: the General Secretaries of the Pontifical Society for the Propagation of the Faith, Tadeusz J. Nowak, OMI, and of the Pontifical Society of St. Peter the Apostle, Fr. Guy Bognon PSS, as well as Father Rouphael Zgheib, National Director of the Pontifical Mission Societies in Lebanon and Father Joseph Sfeir, parish priest of the Lebanese Maronite parish in Rome prayed the Rosary with the "Mysteries of Joy", celebrated in three languages (Italian, French, Arabic) in the CIAM chapel.
The international connection on the Youtube channel was guaranteed by the International Movement of Friends of Lebanon - which arose spontaneously after the Day of Prayer wanted by Pope Francis in the Vatican with the leaders of the Christian communities in Lebanon, on July 1.
The international network of the Pontifical Mission Societies, which took part in the prayer, connecting from different countries in Latin America, Asia, Africa, Oceans, Europe was also present.
The initiative is part of the daily recitation of the Rosary which lasts for 33 consecutive days, until August 4, the anniversary of the explosion that devastated the port and the city of Beirut a year ago and which can be followed on the website www. 33jours.com.
Father Dinh Anh Nhue Nguyen, OFM Conv, who is also Director of CIAM, says: "We wanted to pray in communion with the intentions of the Pope, while Lebanon is experiencing a turbulent and difficult situation. It was a moment of great spiritual intensity, in the awareness that prayer is concrete action, it is the weapon of the poor, of those who have only God as their defender and guide. In communion with the universal Church, we place Lebanon under the special protection of the Virgin Mary, offering our contribution for a new era of fraternity for the nation, in Christ Jesus".
The celebration of the Rosary concluded with the blessing imparted by Bishop Cesar Essayan, of the Apostolic Vicariate of the Latin rite of Beirut, connected from Lebanon. (PA) (Agenzia Fides, 26/7/2021) 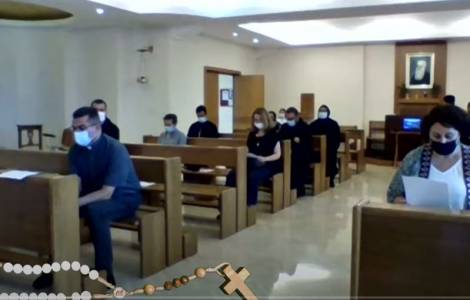 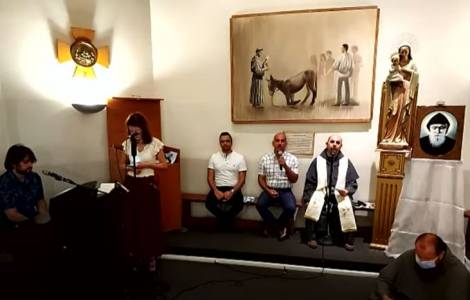