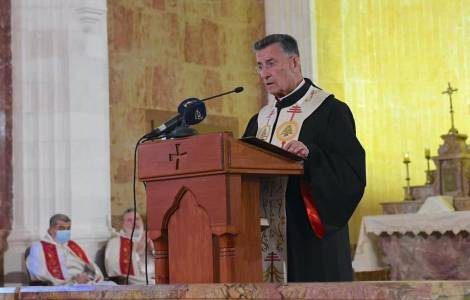 2021-08-30
"Every time a Lebanese emigrates, we lose our battle". Patriarch Rai raises the alarm about migratory "haemorrhage"

2021-08-28
Election of the new patriarch: Armenian Catholic bishops will meet in the Vatican from September 20th

Beirut (Agenzia Fides) - Everything possible must be done to give birth to a new Lebanese government by August 4, the day on which the first anniversary of the terrible explosion that devastated the Port of Beirut almost a year ago falls, causing almost 200 deaths and more than 6 thousand injured. The urgent call not to pass that symbolic date without having given a new executive to the Land of Cedars was addressed to Lebanese politicians by Cardinal Béchara Boutros Raï, Patriarch of Antioch of the Maronites, during the homily of the Eucharistic celebration which he presided over on Sunday, July 25 in Diman, in the church of the patriarchal summer residence. The words of Patriarch Raï came on the eve of the new round of political consultations between the national political forces and Lebanese President Michel Aoun which began today, Monday, July 26, with the aim of identifying the personality to whom entrust the office of Prime Minister and the mandate to bring a new government team to the trust of Parliament. The consultations - the Maronite Patriarch remarked in his Sunday homily - should be conducted avoiding the "usual haggling" on the prerogatives of individual leaders or groups. If the politicians have not managed to adequately reconstruct the dynamics and responsibilities of the Port catastrophe in a year after the explosion of the port, a year after that bloody event, they should at least feel the duty to give the Lebanese people a new government.
In the complex Lebanese political-institutional system, the office of Prime Minister must be exercised by a Sunni Muslim. In August 2020, after the tragic explosion of the Port of Beirut, the government led by Prime Minister Hassan Diab had resigned. Since then, the country that has been struggling with the most serious economic and social crisis in recent decades, has been without an executive. Six weeks ago the candidate designate Saad Hariri, leader of the "Future" Party, also resigned. According to reports from the Lebanese media, in recent days the chances of having the new Lebanese Prime Minister entrusted to Najib Mikati, the entrepreneur who has already led the government of the Country of Cedars in two recent phases of Lebanese political life from April to July 2005 and then from June 2011 to March 2013), have grown. Mikati, thanks to his activities in the telecommunications field, constantly appears on the lists of the richest men in the country, and his personal wealth is credited abundantly in excess of 2 billion dollars.
In recent days, his candidacy has received the support of three former Sunni Prime Ministers, and various Lebanese political forces. Local analysts, consulted by Agenzia Fides, however, point out that the appointment of Mikati - touched in the past by the accusation of having used public resources to finance his own private business ventures - would not have the support of various parties led by Christian leaders, such as the Free Patriotic Movement (founded by the current President Michel Aoun) and the Lebanese Forces. The game underway around the appointment of Mikati could reshuffle the lines in the complicated and always lively Lebanese political scenario. Representatives of the Free Patriotic Movement and Lebanese Forces, always deployed on opposite fronts, have in the last hours expressed converging signals of support for the figure of the diplomat and jurist Nawaf Salam as a potential Prime Minister, as an alternative to Mikati. Salam, during his diplomatic career, was also the Representative of Lebanon to the United Nations, and has a reputation as a person appreciated by US political circles. Precisely for this reason, his candidacy would hardly receive the support of the Hezbollah Party, the relevant political force which has long been allied with the Free Patriotic Movement. The skirmishes and surprise positioning of the various political forces in the process aimed at giving a new government to the country could also question consolidated alliances that in recent years have contributed decisively to designing and conditioning the political scenarios in Lebanon. (GV) (Agenzia Fides, 26/7/2021)

VATICAN - Pope Francis to the Lebanese: "I greatly desire to visit you"

AFRICA/EGYPT - Gestures of brotherhood between Christians and Muslims on the occasion of Eid al Adha, the Islamic Feast of Sacrifice