AMERICA/PERU - "The Good Shepherd never abandons his sheep": a video on the testimony of Sister Aguchita, a missionary 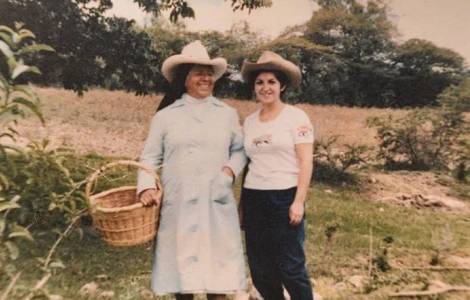 Lima (Agenzia Fides) - "I belong to the Congregation of the Good Shepherd and the Good Shepherd never abandons his sheep": with these words the missionary Sister María Agustina Rivas, better known as "Aguchita", embarked on her journey in the central forest of Peru, at the service of the most needy, at a time of strong social violence. Three years later, in 1990, Sister Aguchita was assassinated by Shining Path. The filming of the documentary that will tell her story has begun, and will be part of the seventh chapter entitled "Life for the Amazon", a series that collects the testimony of men and women who gave their lives in defense of the indigenous Amazonian populations and of their ecosystems. The documentary, produced by the Pan-Amazonian Ecclesial Network (REPAM), in coordination with the Catholic Association of Latin American and Caribbean Communication (SIGNIS), will last 20 minutes. It will be disseminated through social networks; however, it is expected that it will also be broadcast on national television. Sister Aguchita was born on June 13, 1920, south of Ayacucho, in the city of Coracora, the capital of the province of Parinacochas. From a very young age, she created a special bond with nature and with the humblest people. This led her to join the Congregation of Our Lady of Charity of the Good Shepherd when she was 22, in the city of Lima. Three years later, she made her vows and gave her life to Jesus Christ. In 1987, the missionary embarked on a journey to the central forest to assist the most needy in La Florida, an area heavily affected by terrorism, located in the province of Chanchamayo, in the Junín region. Despite several sisters tried to persuade her not to go, considering the many dangers, Aguchita was determined. "She decided to go to the forest facing a rather difficult journey, and not only that, we are talking about a period of internal war, so that kind of journey was extremely dangerous. However, Sister Agustina had the dream of going to the forest, despite her age. , almost 70", explained Fernando Valdivia, who was in charge of shooting the documentary. The film will collect the testimonies of those who met Sister Aguchita in the three main places where she lived. In Lima, with the Sisters of the Good Shepherd; in Coracora, her hometown, to learn about the context in which she was born and her bond with the Church, and finally in the central forest, where she dedicated her last years to the education of young Ashaninka rural women. On May 22, 2021, Pope Francis approved Aguchita's beatification for having dedicated her life to the service of God and to help the poorest, in a period of internal war and social violence. The documentary is expected to premiere at the end of next September, before her beatification. "It will be a great opportunity to have an audiovisual product that narrates the life of a Peruvian citizen who, with her action in the Church, her vocation of faith, has given us the hope of building a country of peace", said Valdivia. (CE) (Agenzia Fides, 23/7/2021)

AMERICA/MEXICO - A priest killed in the state of Morelos

AMERICA/PERU - Recognition of the martyrdom of "Aguchita": religious missionary among the indigenous Ashaninka people