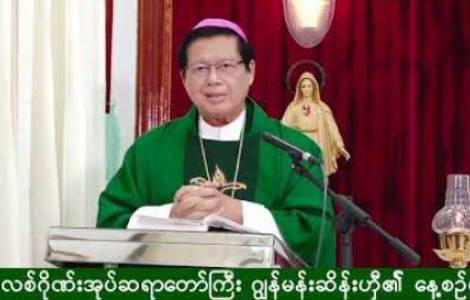 Pathein (Agenzia Fides) - Mgr. John Hsane Hgyi, Bishop of Pathein, in southern Myanmar, died of Covid-19 on July 22, at the age of 68. As the local Church reports to Fides, the Bishop suffered from diabetes and a week ago he had been infected with Covid-19. The virus is very widespread in the nation, with more than 246 positive cases and more than 5 thousand victims only in the day of July 22. "We are shocked and deeply moved, we welcome with sorrow the sudden death of the bishop of the Diocese of Pathein. We thank God for Mgr. John's life and commitment to the people entrusted to his care. He was truly a Good Shepherd who led many Myanmar Catholics, dispensing moral support and spiritual strength in times of crisis. He was an authentic follower of his patron saint, St. John Chrysostom, whom he often quoted in his preaching", says Cardinal Charles Bo, SDB, Archbishop of Yangon and President of the Myanmar Episcopal Conference (CBCM) in a note sent to Agenzia Fides. Mgr. Hgyi, the Cardinal adds, quoting Saint Paul, "he fought the good fight. He finished the race. He kept the faith by leaving us an example to follow. We pray that God will reward him for his good work. The Lord will grant him the crown of justice". On behalf of the Catholic Bishops' Conference of Myanmar (CBCM), Cardinal Bo and Bishop John Saw Yaw Han, Secretary General of the Conferences, expressed their condolences to the Vicar General, priests, religious, family members and faithful of the diocese of Pathein. Mgr. Hgyi was born on December 15, 1953 in Pyingadoe Mayanchaung and was ordained a priest on March 7, 1982. He was rector of the Pyin Oo Lwin Institute of Philosophy, in the Mandalay region, and rector of the Yangon Institute of Theology, Myanmar. In January 2003 Pope John Paul II appointed him Auxiliary Bishop of Pathein and in May of the same year Bishop of Pathein. He was a priest for 39 years and a bishop for 18. Bishop Hgyi was President of the CBCM from 2012 to 2014. As president of the CBCM, he was a member of the Central Committee of the Federation of Asian Bishops' Conferences (FABC). From 2007 to 2012 he was Member Bishop of the FABC Office for Ecumenical and Interreligious Affairs (OEIA). Mgr. Hgyi was present during two FABC Plenary Assemblies: the eighth in 2004 in Daejeon, South Korea and the tenth in 2012 in Xuan Loc, Vietnam. "With his presence at the Plenary Assemblies and at the FABC meetings, he was truly a loyal member of the FABC. The FABC family will certainly miss his wisdom and experience, but we are sure that we will continue to receive his continuous blessings and protection from above", said to Fides Fr. William LaRousse, Assistant to the Secretary General within the FABC. "We express our deepest condolences to Cardinal Charles Bo and all the Bishops of Myanmar, to the diocese of Pathein, to his family and his friends. We will remember Mgr. John Hsane Hgyi at masses and prayers", LaRousse said. Bishop Hgyi has been buried in Mayanchaung, near Pathein, as Fr. Florence Aung Kyaw Oo, chancellor of the diocese reported. The Diocese of Pathein was erected as a suffragan diocese of the Metropolitan Yangon in 1956. (SD-PA) (Agenzia Fides, 23/7/2021)