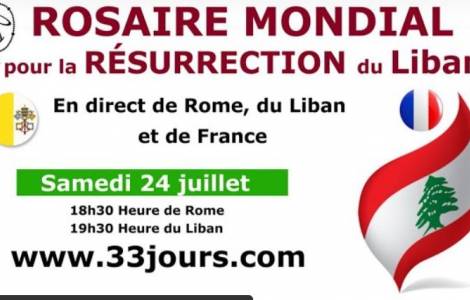 Vatican City (Agenzia Fides) - The Pontifical Missionary Union and the International Center for Missionary Animation (CIAM) are organizing a "Rosary for Lebanon" on Saturday, July 24, on the feast of Saint Charbel, a Lebanese saint. The prayer meeting, scheduled for 6.30 pm, includes the presence of a group of people gathered to invoke the Virgin Mary in the CIAM chapel (located on the slopes of the Janiculum Hill, in the Vatican extra-territorial area) with the possibility for all faithful of the world to participate online, by connecting via the Youtube channel. The event was organized by PUM, representing the International Secretariats of the Pontifical Mission Societies (PMS), in collaboration with Fr. Rouphael Zgheib, National Director of the PMS in Lebanon, with Fr. Joseph Sfeir, parish priest of the Lebanese Maronite parish in Rome, and with Pascale Debbané, regional coordinator of the Middle East in the "Migrants and Refugees" Section at the Vatican Dicastery for Integral Human Development.
As Father Dinh Anh Nhue Nguyen OFM Conv, Secretary General of the Pontifical Missionary Union explains, "after the meeting of Pope Francis with the leaders of the Christian communities in Lebanon, on July 1, 2021, an international prayer movement was born, promoted by various Catholic groups and communities to ask for peace and salvation in Lebanon, in which the Pontifical Mission Societies intend to get involved". The international movement has invited Lebanese from all over the world and friends of Lebanon to pray the Rosary for 33 consecutive days, simultaneously at 7:30 pm (Rome time), until August 4, 2021, anniversary of the tragic explosion in the port of Beirut. Every day, on the website www.33jours.com a specific intention is proposed for Lebanon (for example: for the rehabilitation of the economic and political situation, for the poor, for the medical profession, for the children of Lebanon, for the unemployed). To date, over 230,000 Rosaries have been offered for the cause of Lebanon. "In this context, let us live together the special Day of Prayer for Lebanon in prayer which will take place live this Saturday, July 24, at 6.30 pm Rome time, the feast of Saint Charbel. A Rosary will be recited live from Rome, right from our International Center for Missionary Animation, a few steps from St. Peter's Basilica, with connections in Lebanon and France, to ask for the resurrection of Lebanon and an era of peace and fraternity in Christ Jesus. Entrusting the country to loving hands of Mary Most Holy, in prayer all together, we believe that Lebanon will rise again", concludes Father Dinh Anh Nhue Nguyen OFM Conv. (Agenzia Fides, 22/7/2021)