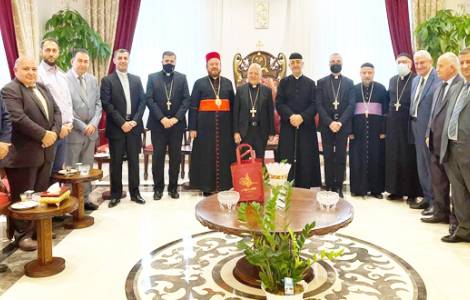 Erbil (Agenzia Fides) - A delegation of the Chaldean Church, led by Patriarch and Cardinal Louis Raphael Sako, held a series of meetings in Erbil with representatives of other Churches and ecclesial communities present in Iraq, in an attempt to start a process aimed at redeveloping and relaunching instruments of contact and ecumenical organisms "frozen" for years in a state of substantial inertia. Patriarch Sako, with some of his collaborators, met among others Mor Nicodemus Daoud Matti Sharaf, Syrian Orthodox Archbishop of Mosul, Archbishop Nathanael Nizar Samaan, at the head of the Syrian Catholic diocese of Hadiab (Iraqi Kurdistan) and representatives of the Assyrian Church of the East. In the meetings - the accredited sources of the Chaldean Patriarchate report - the exponents of the various Churches focused in particular on the need to find new ways of fraternal cooperation, in light of the many emergencies that afflict the Iraqi people and represent the real context in which the ecclesial communities are called to confess the same faith in Christ. The meetings represented a first step in the process aimed at relaunching the role of the Council of Heads of Churches present in Iraq, an ecumenical body established in 2006, which in recent years has entered a phase of substantial aphasia and inaction. In June, as reported by Fides (see Fides, 18/6/2021), Patriarch Sako had published an intervention centered on ecumenical relations in which he underlined, among other things, that the path to restore full unity between Churches and ecclesial communities "is not as easy as some people imagine". In that text, the Iraqi Cardinal recognized that the issue of the path to restore full sacramental unity among the baptized represents a "complex question" that cannot be treated with arrogance or sentimentality. The Churches and ecclesial communities - acknowledged the Patriarch - cannot be unified by force, and they cannot even be stripped of their individual identities "by decree", because "the Church is not a mere administrative entity", but a reality intimately characterized by its own, unmistakable spiritual nature. The historical and ideal model to look at - Sako emphasized, continuing his reflection - remains that of the nascent Church, recounted in the Acts of the Apostles. At that beginning - the Iraqi Cardinal pointed out - the unity of the baptized was not an ideal goal to be achieved through human efforts and stratagems, but it flourished as a gratuitous effect of the faith and charity that animated the hearts reached by the grace of Christ. In his speech, the Chaldean Patriarch had also deplored the inaction which, in his opinion, characterizes the ecumenical bodies and inter-ecclesial contacts in his country, calling into question precisely the period experienced in recent years by the Council of Patriarchs and heads of Churches in Iraq, made evident also by the comparison with the operational liveliness of similar organizations present in Egypt, Jordan and Lebanon. (GV) (Agenzia Fides, 21/7/2021)

AMERICA/NICARAGUA - Message from the Archdiocese of Managua: "There are no preconditions for democratic elections"