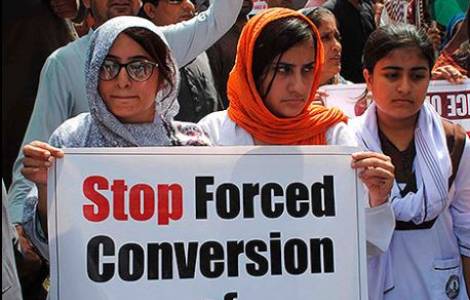 2021-10-11
International Day of the Girl: the Church recalls forced marriages and the religious conversion of minors

2021-09-30
Christian teachers for state schools: launch of a training course

2021-09-27
Pakistani Bishops' appeal: everyone is actively called to participate in the synodal process

Lahore (Agenzia Fides) - The Pakistani Ministry of Religious Affairs has no intention of setting age limits for religious conversion. As Fides learns, during a recent meeting of the Parliamentary Commission for the rights of minorities in the Senate, the Minister for Religious Affairs, Noorul Haq Qadri, said he does not support a restriction on religious conversion before 18 years of age. If someone wishes to change their religion before reaching the age of 18, it is their choice, he said, while marriage is a another discussion. The matter of the minimum age limit for marriage had been sent to the Council of Islamic Ideology, an advisory body. However, as Christian organizations in Pakistan point out, the issue is closely related to religious conversion. In a message sent to Agenzia Fides, Nasir Saeed, Director of the NGO "CLAAS" (Center for Legal Aid Assistance & Settlement), explains that the cases of young Christian and Hindu girls forced to convert have increased dramatically in the last year. And he notes: "Taking into account the overall scenario and considering the current setting of a minimum age of 18 for conversion is crucial. I have personally come across at least two dozen cases of forced conversion of young Christian girls in Punjab, and 90% of the girls are under the age of sixteen". According to the CLAAS Director, "often the police convert kidnapping cases into cases of 'religious conversion' and then, instead of taking the necessary measures against the kidnapper, they give a conversion certificate to the kidnapped girl's parents, saying that the girl converted to Islam of her own free will, so there is nothing they can do and everything is legal". "In some cases, the police even told parents that they must be happy because their daughter had converted to Islam. Even Pakistani courts do not usually do justice to victims and their families either because, instead of deciding and enforcing the laws in force in the country, cases are decided on the basis of statements drawn from the abducted girls. The judges completely ignore national and international laws and harm the whole country".
Given this scenario, "it is timely and urgent that the government act according to the recommendations of the Senate Committee on Minority Rights, setting the minimum age for religious conversion at 18 years", says Nasir Saeed. According to Christian civil society leaders in Pakistan, a measure limiting the age of religious conversion to 18 may be helpful in curbing the phenomenon of the kidnapping, conversion and marriage of Christian and Hindu girls. But the best way to solve the root problem, they say, is to stop forced marriages by guaranteeing the application of a minimum age of 18 years to marry, according to the Law for the Protection of Women. (PA) (Agenzia Fides, 21/7/2021)