ASIA/PHILIPPINES - Participating in the political life of the nation and "choosing a leader who embodies the example of Jesus": the invitation of the Bishops 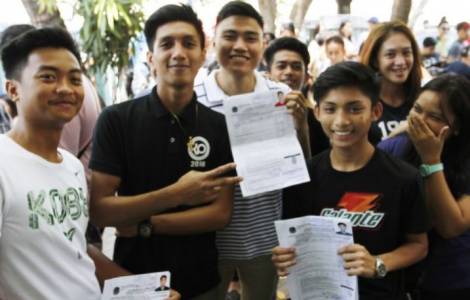 Manila (Agenzia Fides) – Almost eight months before the general elections scheduled for May 2022, Mgr. Pablo Virgilio David, Bishop of Caloocan, recently elected President of the Bishops' Conference of the Philippines (CBCP), a position that will become executive on December 1, invites voters to register on the electoral list for the next elections and to participate consciously in the political life of the nation. If you have not yet registered, you have the opportunity to do so now. It is the most basic expression of your willingness to participate in nation building", he says in the appeal sent to Fides. "Vote according to your conscience. But also make sure that your conscience is well formed and well informed", notes Bishop David.
A special thought for young people, who are invited to attend, vote and express "their full potential" to truly influence the future of the country. "Youth votes" refers to voters aged between 18 and 35, who in the Philippines make up about 37% of the total electorate, according to data released by the Electoral Commission. Therefore, young people constitute a large segment of the electorate who can significantly influence the outcome of national and local elections. The key issues addressed in each election directly concern the problems and challenges faced by young people, their future employment, the services they can benefit from, honest governance focused on transparency and the common good and quality education. Bishop Broderick Pabillo, currently Auxiliary Bishop of Manila, and recently appointed Apostolic Vicar of Taytay, also spoke of the 2022 vote, urging voters to "choose a leader who embodies the leadership example of Jesus Christ". According to Bishop Pabillo, "Christians have the opportunity to look to Jesus as a guide in their search for authentic leaders".
Looking to Christ Jesus, he noted, "the purpose of leadership is not to gain power but to serve, and he did so with humility, selfless love and compassion". "It is on this basis that we should choose our leaders, and not on the basis of polls and press releases, and especially not on the basis of social media invaded by trolls", Bishop Pabillo said. "Instead of looking at polls, let us be influenced by God's Word. He has a lot to teach us about leadership, even political leadership", he said.
According to the Apostolic Vicar of Taytay, "the country needs leaders who are close and moved by the terrible situation of the people. We need leaders who have mercy and compassion and who do not continually say 'kill, kill, kill'. A good shepherd offers himself so that the people, us, the population, can live". For this reason the Bishop asks the voters not to be influenced by the results of the many pre-electoral polls whichhe says "are often used to condition the minds of the public". In a recent poll by the "Pulse Asia" institute, Davao City Mayor Sara Duterte and her father, current Philippine President Rodrigo Duterte, are the most popular potential presidential and vice-presidential candidates of the year. In view of the general elections, scheduled for May 9, 2022, the Electoral Commission is expected to publish by January 2022 the official list of candidates, including those running for President, Vice President, for the seats of 12 senators and 308 members of the House of Representatives. Voting is also scheduled for 81 governors and vice-governors, 780 seats in provincial councils, 1,634 mayors and deputy mayors of municipalities, and there are 13,546 seats to be assigned in the municipal councils. According to the Philippine Constitution of 1987, general elections are held every six years on the second Monday in May. (SD-PA) (Agenzia Fides, 21/7/2021)