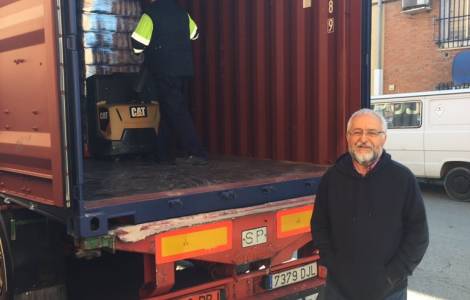 2021-10-28
"Our commitment continues unabated": the Camillians help the population between criticisms and some positive notes

Madrid (Agenzia Fides) - Father Miguel de Haro, a Spanish Redemptorist missionary at the helm of a small NGO that manages several projects in Haiti, cannot return to the Caribbean island where he resides, following the events related to the assassination of President Moïse.
In this period he was busy building a small social center in Les Anglais, in the south of the country, and is collecting the necessary material to take to Haiti.
In an interview with Fides, Father Miguel describes the situation in the Caribbean country, which he has known for some time. "According to the information I received from Haiti, people live in fear as the killings have continued on the island, even in the capital, Port au Prince. Armed gangs are acting to create and instigate fear, and they succeed. This leads to social and political chaos with the risk of anarchy - he tells Fides -.
Faced with this scenario, International Organizations, such as the UN, OEA, EU, are pushing to obtain a consensus, a political agreement, between the parties and the institutions, more precisely between Claude Joseph and the new presidential candidate, Ariel Henry. According to the latest reports, the latter has received recognition from Joseph for leading the country, which also helps to create a more serene climate for President Moïse's funeral on July 23. This is an important step towards rebuilding the country, but it is certainly not the solution". For the missionary, the solution cannot be represented by elections managed, as in the past, by the usual political groups that todat lack credibility. "It is not even necessary to ask for the intervention of international organizations to control the conduct of the vote. We must trust the people, so that every Haitian can have a document and can really participate in the vote. Secondly, Father Miguel believes that it is necessary to verify that the candidates have no contacts with drug trafficking or any type of corruption. "Here, I think the Church could participate directly, by recommending young and uncorrupted candidates, to succeed in effecting a generational change in the leaders of Haitian politics. We must propose candidates with an ethical sense, with human qualities, who are trained to bring about the necessary transformation of the country. It is only in this way that people can regain confidence and go to the polls, and that the elections will be truly representative". Regarding the current situation, the missionary reiterates that "it is very difficult, there is no economic stability and no security. We must change the idea that the only way out is violence, but rather offer dialogue, respect and solidarity. The Haitian people must regain their dignity as a people. A proposal which, in my opinion, could give confidence to the population and would be part of the solution, is to control the money that any organization receives to help Haiti. Many donations have disappeared, either because the state intervened or because what was promised was not achieved.We need these controls to be public and transparent". In this regard, Father Miguel reiterates the importance of controlling and accounting for the money invested in a public way, whether the NGO in question is sponsored by famous people or prominent politicians. "In this context - he continues - the Church could be of help, which as an institution has the recognition of the people, so it could ask to make the controls. There is no interest in losing any privileges or presenting oneself as an uncomfortable reality, but it would be a way of carrying out a mission, that is, recognizing that words are not enough but facts are needed". There are many rumors circulating about Haitian politicians that they have relations with organized crime, directly or indirectly. "As long as this situation continues, there will not be a different future for the people", underlines the missionary, who hopes: "the Church should speak in a prophetic way and say aloud to politicians not to play with the hunger of the poor, because they are the ones who pay the consequences of hunger and despair". "I have faith in young Haitians, concludes Father Miguel, who love their country and want a different future, more ethical and more supportive for all those who have been subjected to the arrogance of a minority for too long". (CE) (Agenzia Fides, 21/7/2021)

AMERICA/NICARAGUA - Justice and Peace: "Everyone has the right to act in conscience and freedom"