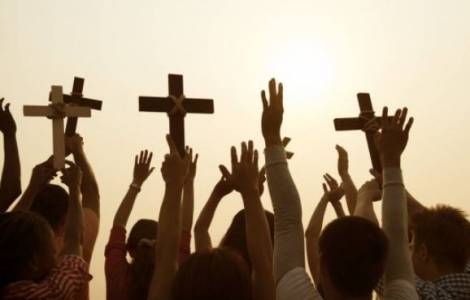 Chattogram (Agenzia Fides) - "By receiving adequate formation, young people can overcome, with the help and grace of God, all the challenges, fears and concerns that help them realize their dreams. They can be missionaries of the Kingdom of God on this earth", says Mgr. Lawrence Subrata Howlader, CSC, Archbishop of Chattogram, President of the Episcopal Commission for Youth, to Agenzia Fides. Archbishop Lawrence participated in the Synod on young people, celebrated in the Vatican and was able to see up close the life of young people in the world. "In recent years - he says - I have participated in all the National Youth Days. I have observed how sincerely young people work for the Church. I was struck by their positive mentality and their dedication to the evangelical spirit". "In many parishes, young people collaborate with the elderly and children and are very active", he reports, praising the young people involved in the Bangladeshi Church: "I have noticed that many young Catholics have helped the needy during the COVID-19 pandemic and have also organized environmental activities to celebrate Laudato Sì. Young people need powerful sources of inspiration, and then they move forward", he notes. According to the Archbishop, "the ongoing formation of children and young people and young people, in the family, at school and at the university, is important. In this way we will also have more religious vocations", he explained.
Since he is the new Archbishop of Chattogram, Mgr. Lawrence Subrata Howlader illustrates the new pastoral plan in a diocese characterized by the presence of tribals. "I have been sent to the people of Chattogram as Pastor, my essential plan is to lead the life of the flock entrusted to me according to the teachings of Christ". Many internally displaced people also live in the area: "We want to build a relationship of brotherhood. Being a missionary is our key responsibility as baptized". The Archbishop focuses on the collaboration of the laity: "To create a vibrant and mature community, we need the active cooperation of an exemplary leadership of the laity", reiterating that "reaching the marginalized faithful will be the priority in the pastoral journey", alongside "the formation of young people, dialogue between different religions and confessions".
Archbishop Lawrence, 56, took office on May 22 as Archbishop of Chattogram. He replaced Archbishop Moses M. Costa, who died last year due to Covid-19. (FC-PA) (Agenzia Fides, 20/7/2021)