ASIA/INDIA - Attack on nuns, closure of the emergency department of a Catholic hospital 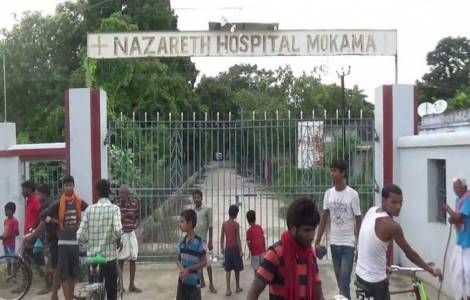 Mokama (Agenzia Fides) - The Emergency Department of the Catholic Hospital of Nazareth in Mokama, southeast of Patna, in the Indian state of Bihar, was closed after the attack, on July 16, suffered by the nuns who work there. As reported to Agenzia Fides by Sister Anjana Kunnath, Administrator of the Nazareth Hospital in Mokama, a group of about 30 people attacked the Sisters of Charity of Nazareth, who run the hospital, devastating the Emergency Department. According to the reconstruction of the events, the group had brought a man with a serious gunshot wound, but when he was examined and treated by the doctor on duty, his death was only confirmed. "The crowd insisted that the man still had a heartbeat. They threatened and terrorized the medical staff, the guard and the other patients", says Sr. Kunnath. The crowd violently beat Sister Aruna Kerketta, who was operating in the emergency room, while "there were also some police officers from Mokama who remained spectators while the crowd behaved violently". The patient, a 40-year-old man, Pankaj Kumar Singh, was shot dead on his way home from work on a motorcycle. "It is tragic to suddenly lose a young man like this. But it is just as tragic to terrorize the nurses on duty and the doctor", said Sr. Kunnath, addressing the police, who had been alerted by the administration. Currently, the hospital has only outpatient and inpatient medical services for obstetrics and gynecology. It also has services such as the laboratory, radiography, ultrasound and pharmacy, as well as a physiotherapy service. "Our structure is at the service of the territory and of the local people, without any discrimination, it is in everyone's interest to preserve it and keep it functioning", stresses Sister Kunnath.
The Nazareth hospital began operating in 1948 with 25 beds and gradually grew to a 150-bed facility in 1965. The Congregation, based in Kentucky in the United States, initiated this project at the invitation of the Bishop of Patna and local Jesuits. In 1984, the hospital was expanded to become a 280-bed facility with the help of a German funding agency. The Sisters of Charity of Nazareth have also launched several health projects such as "Mahila Mandals", an immunization program, a tuberculosis and leprosy control program. In 2004, the hospital opened a community care center for the treatment of AIDS patients. In more than 70 years, the hospital has treated hundreds of thousands of people, mostly poor, from many districts of Bihar, West Bengal and even the borders of Nepal. It also organized training courses for nurses and health personnel. (SD-PA) (Agenzia Fides, 19/7/2021)