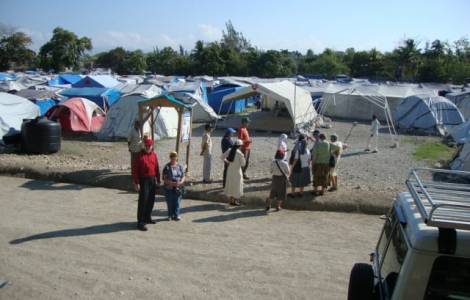 2021-09-22
Qualified missionary animators: course to deepen the history and objectives of the Mission Day, Missionary Month and the Missionary Campaign

2021-09-06
Independence Day "should make us recognize that we are all brothers, including those with whom we disagree"

Brasilia (Agenzia Fides) - To thank all the missionaries sent to Haiti, as part of the Nazaré intercongregational solidarity missionary project that unites the Church of Brazil with that of Haiti, a Eucharist will be celebrated presided over by Monsignor Joel Portela Amado, Auxiliary Bishop of Rio di Janeiro and Secretary General of the Brazilian Bishops' Conference (CNBB), in the chapel of Our Lady Aparecida, at the headquarters of the CNBB, on Saturday, July 17.
The president of the Brazilian Conference of Religious (CRB), Sr. Maria Inês Vieira Ribeiro, in a specially recorded video message, comments on the presence of Brazilian religious in Haiti since the country was hit in 2010 by a violent earthquake and caused about 300,000 deaths (see Fides, 13/1/2010). The nun talks about the challenges of the inter-congregational missionary project, developed by the National Conference of Bishops of Brazil (CNBB) and the Conference of Religious of Brazil (CRB), with the support of Caritas Brazil and in collaboration with the Haitian Archdiocese of Port-au -Prince and the Conference of Religious (CHR) of Haiti. The video, sent to Agenzia Fides, talks about the difficulties encountered by the Haitian people, which unfortunately persist even today: "Haiti is going through a dramatic moment. It is the poorest country in Latin America", underlines Sister Maria Inês, recalling that the presence of the Brazilian Church in Haiti, through 19 female religious congregations that have alternated in the different phases of the mission with the presence of 19 religious, aims to alleviate at least a little the suffering of the Haitian people. According to the president of the CRB, these nuns were and are a solidarity presence, especially in the moment of pain that followed the earthquake: "The most significant thing is their presence. The people of Haiti know this: these nuns are with us, they support us, they are hope in the field of faith, solidarity, social service".
The Congregations and Religious Institutes participating in the Mission in Haiti, from 2010 to 2021, are: Pious Maestre Venerini, Sisters of Providence of Gap, Little Sisters of Providence, Franciscan Catechists, Sisters of Saint Catherine of Alexandria, Sisters of Divine Providence , Daughters of Divine Love, Carmelites of Divine Providence, Franciscans of God's Providence, Missionaries of Jesus Crucified, Company of Saint Teresa of Jesus, Servants of the Most Holy Trinity, Franciscans of Saint Joseph, Franciscan Sisters of Christ the King, Religious of Christian Education , Society of Apostolic Life Fraternity and Hope, Congregation of the Carmelites of Vedruna, Giuseppino Institute, Missionaries of St. Charles Borromeo.
The CNBB publishes, on its web portal, a series of contributions showing the activities carried out in Haiti thanks to the inter-congregational project, from the first group that left immediately after the earthquake (see Fides, 20/09/2010), up to the latest works.
An important aspect of missionary work is the commitment to help people regain their dignity, improve self-esteem, rebuild their hopes and their projects (see Fides, 17/6/2014). (CE) (Agenzia Fides, 16/7/2021)

AMERICA/BOLIVIA - Giving one's life so as not to abandon the elderly: the missionary witness of the religious who died of Covid

AFRICA/DR CONGO - Fidelity to mission: 13 young people newly professed in the Congregation of the Immaculate Heart of Mary