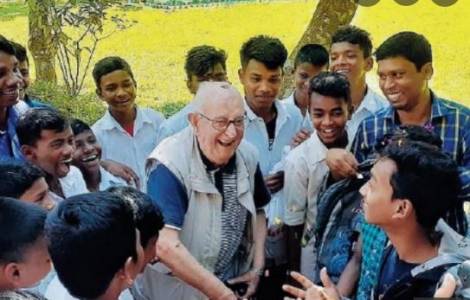 Dinajpur (Agenzia Fides) - The Catholic diocese of Dinajpur and the entire Church in Bangladesh remember with joy and gratitude the life and work of Father Adolfo L'Imperio, priest and missionary, member of the Pontifical Institute for Foreign Missions (PIME), who died at the age of 91 on July 3 in Lecco, Italy. The priest spent 51 years of his life in Bangladesh, especially in the diocese of Dinajpur. "He was a man of prayer and a priest of great spiritual depth", says in a note sent to Fides Bishop Sebastian Tudu, who today is at the head of the diocese of Dinajpur, adding that "the missionary always had a smile on his face". "He was a good-natured kind person. He dedicated his entire life to the human and pastoral service of children and young people for whom, following the example of Christ, he had a predilection. He arrived in 1969 and helped build our local Church at all levels, that will not forget him", says Bishop Tudu. Father L'Imperio was born on February 28, 1930 in the Italian city of Gaeta. Ordained a priest on June 29, 1967, after a period of language training in England, he arrived in Bangladesh as a missionary in 1969. As the local faithful recall, in 1969, when Father Adolfo arrived, Bangladesh did not yet exist: the country was in fact called "East Pakistan". Just two years after the arrival of Father Adolfo, the "war of liberation" broke out, which ended with the creation of an independent state, Bangladesh. They were terrible years of hunger, famine, natural catastrophes. In the new country, which then had 70 million inhabitants (today there are 166 million) Father Adolfo directed the Caritas operations in the north of the country and, at the same time, in the area of Dinajpur, to the natives of Santal and to the lepers. In Dinajpur, he built schools, churches, hostels, dispensaries. For about ten years, he was pastor of the Cathedral of Dinajpur and Director of the "Leprosy Project". Among the structures he built are the National Major Seminary of Banani, in Dinajpur, St. Phillip's High School, Dinajpur Cathedral, the Church of Mothurapur in Pabna and the Church of Rangamatia in Dhaka. From 1972 to 1976 he was the Regional Superior of the Pontifical Institute for Foreign Missions in Bangladesh. He was the head master of St. Phillip's High School and director of St. Phillip's boarding school and director of St. Joseph's Minor Seminary in Dinajpur. In 2014, Father L'Imperio finished his active service, but remained in Dinajpur, in the local PIME house, continuing to help the sick, the needy, the unemployed youth in particular. Dhanjuri had always been his "first love" and here in recent years he helped build the new boarding school for children, the new church and the new school. In 2019 he was transferred to Italy, at the PIME Father's Retirement Home in Lecco where he peacefully spent the last part of his life, always carrying Bangladesh in his heart. (PA) (Agenzia Fides, 8/7/2021)