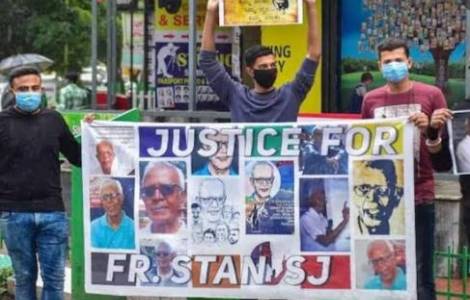 New Delhi (Agenzia Fides) - "With deep anguish and sorrow, we mourn the death of the martyr of the marginalized people, Father Stan Swamy, SJ. His last month in custody on a hospital bed till the last moments is the most heart wrenching tragedy of an innocent man persecuted for doing good. The custodial hospitalization restrained his movements, but in his death, his legacy is set free now, inspiring thousands in every part of India and the globe. His mission will continue and will never succumb to evil", wrote Cardinal Charles Maung Bo, Archbishop of Yangon (Myanmar) as President of the Federation of Asian Bishops' Conferences (FABC), in a message sent to Fides, expressing the condolences and solidarity on behalf of all the Asian Bishops, after the death of Indian Jesuit Father Stan Swamy (see Fides, 6/7/2021). Cardinal Bo notes: "India has a glorious history, as the cradle of many world religions, but she also nurses a wounded history. Even the great Mahatma Gandhi, the saint who lived for the poor, was arrested and incarcerated under sedition laws by British officials. The same Gandhi is the pivot of Indian history today. We take solace in the thought that Father Stan Swamy, too, followed Gandhi’s nonviolent path, with a great love for those in the margins. He is the latest saint of the modern India’s poor". According to the Cardinal, Stan Swamy understood and lived his priesthood, "extending his altar to the streets and hills of those obnoxious corners of injustice, breaking the bread of good news of human dignity and justice especially among the indigenous (tribal-Adivasi) people". "For too long - notes the text - the innocent tribals trudged a merciless way of the Cross inflicted on them by corporate greed and unjust laws. His tireless struggle to liberate these marginalized communities brought him to the peak of Calvary, of incarceration, deprivation and ultimate death. He died as a true disciple of Christ". His death, concludes the President of the FABC, " he has shone a damning light on the injustice that becoming a norm in the world: Tribals and indigenous people are expendable to corporate interests and their political enablers. Even in Asia, starting from the South China Seas to the central parts of India, a vast stretch of land of millions of acres was inhabited by the indigenous tribes. For thousands of years, they have protected the “lungs of Asia”. Now an ecological COVID of greed, has waged a war against these lands and the people. Father Stan Swamy died while accompanying the powerless tribals in their struggle and dream. In mourning him, we too commit ourselves to a new world of justice and peace".
Fr. Vinod Sushil Soreng SJ, Jesuit of the Indian province of Ranchi, professor at the Jesuit seminary in Chennai, Tamil Nadu and personal friend of Swamy adds, in a message sent to Fides: "Stan was labeled as a terrorist, anti-national, responsible for inciting violence and violation of law and social order; he was accused of being an accomplice of the Naxalites. I am ashamed of the way in which he was repeatedly denied justice in recent months. As a writer, thinker, scholar he said not to be silent when the rights of some are being violated, especially those of the tribals and the dispossessed. He was a prophet of our times, fearless, bold and tireless. He challenged institutions and systems by asking serious and well-founded questions, so that the rights of tribals and Dalits were safeguarded. He often said: if you cannot be in solidarity with those who suffer or who are denied the fundamental rights to life, your life as a religious or human being is only superficial. Let us bear witness to his legacy: his life will inspire generations to work for the dignity and justice that is denied to the poor, minorities and indigenous peoples throughout the world". (PA) (Agenzia Fides, 7/7/2021)