AMERICA/NICARAGUA - The Bishops: "Nicaragua is bleeding" due to repression, emigration, pandemic, hunger 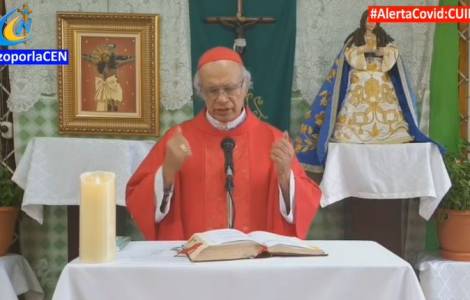 2022-01-13
Bishop of Matagalpa: Human dignity and freedom are prerequisites for a new beginning

2021-11-22
Justice and Peace: "Everyone has the right to act in conscience and freedom"

2021-10-26
The Bishops recall "the basic and indispensable conditions in order to hold free, fair and transparent elections"

Managua (Agenzia Fides) - Nicaraguan Cardinal Leopoldo Brenes, Archbishop of Managua, said last Sunday, July 4, that there are people in the country who "want to take power away from the Church", in the midst of the local socio-political crisis, aggravated by a wave of arrests of opposition leaders (see Fides, 17/6/2021). "Today we hear, in many moments, people who attack us, who attack Pope Francis, who in one way or another want to diminish the strength of the Church, insult us, we are persecuted, slandered, but all this falls on deaf ears, because our hope and trust in the Lord is strong", Cardinal Brenes said during the mass.
Nicaragua celebrated on Sunday the feast of the "Blood of Christ", one of the most heartfelt feasts of popular devotion.
Cardinal Brenes celebrated two masses: in the Cathedral of Managua and another broadcast by the archdiocese's television station. In the introduction to the Eucharistic celebration, he stated that "all the people of Nicaragua are proud to have the image of the Blood of Christ, and it will never be destroyed, because it is within our hearts". Last year an arson fire devastated a chapel in the Cathedral of Managua on July 31, 2020, seriously damaging the so-called "Blood of Christ", a precious wooden crucifix, dating back 382 years. The sacrilegious act was added to other acts of vandalism perpetrated in the previous days against Catholic churches in other cities of the country. These facts - it was underlined in the text of the Archdiocese of Managua - "represent a serious persecution against the Catholic Church, her Pastors and all the faithful, in contradiction with the religious freedom guaranteed by our Constitution" (see Fides, 1/8/2020). As reported by the international press, Nicaragua is currently experiencing a wave of arrests for political reasons, which so far has only affected opposition leaders. Those who identify themselves as supporters of President Daniel Ortega have publicly insisted that even Bishops can be arrested. "We live in the midst of difficulties, insults, hardships, persecutions, slanders", Cardinal Archbishop of Managua reiterated. "We have difficulties, we have big problems, we have the problems of the pandemic that distress us, we have our political, social, economic problems, families who suffer because many of their relatives are deprived of their liberty", he added, referring to political prisoners. Even the Bishop of Matagalpa, Mgr. Rolando Álvarez, during last Sunday's homily underlined the suffering that Nicaraguans experience due to the repression exercised by the State, as well as forced migration, arbitrary imprisonment, the pandemic, unemployment, the lack of food and injustice, as reported by the note sent to Fides.
"Our minds and hearts think and pray for the thousands of forced migrants, who especially in recent weeks are looking for a better horizon and leave their land risking their lives to find what our beautiful country has not offered them", the Bishop said, adding that "entire families cross the desert of migration in caravans of heartbreak". The prelate also warned that "Nicaragua is bleeding for the suffering of those deprived of their liberty, because of broken families due to forced migration, because of the pain of the sick due to the pandemic, because of extreme poverty". However, Bishop Álvarez urged Nicaraguans not to fall into despair and pessimism: "We must continue to desire and work for a new Nicaragua, a new nation, for a modern, functional and pluralist state, a country where we can all live, without contempt or exclusions, where there is respect and we can work under conditions of social and political equality. Conditions that we expect and need from the next elections, conditions of equality that give validity to the elections", concluded Álvarez. Relations between the Catholic Church and President Ortega, which have never been close, were interrupted in July 2018, when the Nicaraguan President accused the Bishops of planning an alleged "coup", as defined in the anti-government demonstrations of that year, which were repressed with armed attacks that resulted in hundreds of deaths, imprisoned or missing (see Fides, 13/11/2018 and 21/7/2018). The recent arrests of opposition leaders come just over four months before the November 7 elections, in which Ortega tries to extend the mandate that began in 2007. (CE) (Agenzia Fides, 6/7/2021)