ASIA - "Rosary for Asia": Asian faithful in prayer for the end of the pandemic, healing and peace in the world 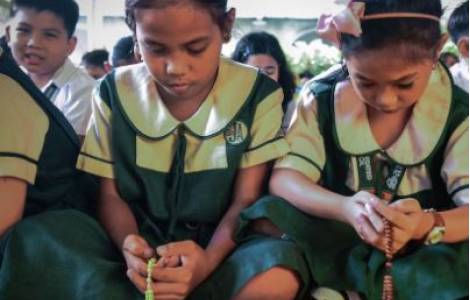 Manila (Agenzia Fides) - The Bishops and faithful of Asia have gathered in prayer for the end of the pandemic, the healing of peoples and peace in the world. Participating in the event "Rosary for Asia", organized and broadcast online in recent days on Radio Veritas Asia (RVA), numerous Bishops, priests, religious and lay people from the continent joined in the common prayer, led by Cardinal Charles Maung Bo, Archbishop of Yangon (Myanmar) and President of the Federation of Asian Bishops' Conferences (FABC).
As Fides learned, the Cardinal said:
"Let us pray for the end of the pandemic, the end of violence and wars, poverty and hunger. Let us pray for all the people of our land, whatever their faith or religion is. In these difficult times, everyone must continue to pray for peace to reign in our hearts, in our leaders, in our land".
"We are confident that when we pray with fervor and faith for the gift of peace, the Lord will surely grant us his peace, a peace that surpasses human understanding, a peace that will last", said Cardinal Bo.
The "Rosary for Asia" program was broadcast in 22 languages by RVA, owned by the FABC, based in Manila, Philippines, on June 29th. "On the solemnity of the Apostles Peter and Paul, the two pillars of the Church, let us bring to prayer all our needs, including the end of the pandemic, the end of violence and wars, poverty and hunger", the Cardinal reiterated. "Let us bring to prayer all the peoples of this vast continent, all nations and governments, all those who care for the sick, all those who care for the poor and the marginalized", he added. Priests from all over Asia led the rosary in six languages: English, Bengali, Burmese, Mandarin, Tamil and Vietnamese.
Radio Veritas Asia is defined as "a missionary radio in Asia" according to the FABC, it promotes the Gospel on the continent and dialogues with other religions and cultures. The radio, founded in Manila in 1969, celebrated its 50th anniversary in 2019.
Since 1969, the radio uses shortwave technology to broadcast. In response to changes in social communication, in 2018, the management decided to stop broadcasting in short wave and migrate to online and digital media. This also paved the way for the decentralization of RVA's language services. Today RVA has 22 language services that reach the entire continent and continues to be a precious tool for proclaiming the Gospel to all peoples of Asia. (SD-PA) (Agenzia Fides, 3/7/2021)

AMERICA/DOMINICAN REPUBLIC - Radio Seybo: 47 years at the service of the mission