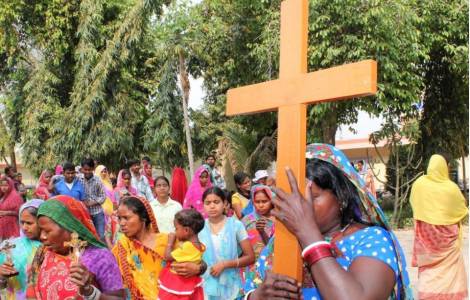 New Delhi (Agenzia Fides) - Indian Christians celebrate Indian Christian Day for the first time on July 3rd on the feast of St. Thomas the Apostle. The Apostle Thomas came to India around 52 AD and was martyred near Chennai in Tamil Nadu, South India, in 72 AD. The church commemorates his martyrdom on July 3. This year, for the first time, Christians from all churches in India (and also those who live in other parts of the world) will celebrate "indian Christian Day" (Yeshu Bhakti Divas) All believers in Christ and members of other faith communities are invited to the ecumenical initiative.
A joint Declaration drawn up by representatives of the various churches states: "The proclamation of July 3, 2021 as Indian Christian Day is a moment for believers in Christ of Indian origin to celebrate the person and message of Jesus Christ, which was written in 52 AD by St. Thomas the Apostle". From now on we as Indian Christians, who also preserve our identity within the Indian cultural heritage, will unite every year with all those who want to celebrate with us regardless of language, custom, belief or origin".
Indian Christian Day is of particular importance in several ways: firstly because it is an initiative of lay people of different denominations and secondly because it brings Christians from different churches in India together to serve Christ in their own country and to love one another . The initiative aims to underline, recognize and celebrate the influence and contribution of the Christian faith to India.
The Day will include a number of local and national events, as well as a global event. The website www.indianchristianday.com provides important information.
The organizers point out that Indian Christians have always made an important contribution to the country: They were an integral part of the Indian struggle for freedom and also members of the constituent assembly. They were ministers in central and state governments, and from their ranks came state governors, members of the judiciary and other constitutional organs of the nation.
"The contribution of Christians in the field of health education is well known. Numerous educational institutions, universities and research centers are supported by Christians. The same applies to hospitals and health institutes. Christians also work effectively in social service and help the poor, marginalized, excluded and exploited, tribals and Dalits in a completely unselfish way. They are loyal to the constitution and have always been visible in their position on human rights", the Indian Jesuit Cedric Prakash told Fides.
"However, in recent years there has been increasing misinformation about the history and spread of Jesus' message in India. In addition, attempts are made in some places to discredit Christians with falsehood", says Fr. Prakash. "This misleading narrative claims that the Christian message was introduced to India by European colonial powers and that Christ is alien to the cultural ethos and to the Indian people". "Indian Christian Day," notes Prakash, "also aims to counteract these attempts ... and instead focuses on a message of solidarity, hope and unity".
"On July 3, 2021, Indian Christians are called in a very special way to celebrate their faith in unity, which means: loving God and serving others; giving and doing good in society; being witnesses of justice, peace and truth, just as Jesus would have done", concludes Fr. Prakash.
According to the 2011 Indian census, out of a population of 1.3 billion, the population of Hindu religion is 966 million (80%). Muslims are 172 million (14%), while Christians are a total of 29 million (2.3%). (SD-PA) (Agenzia, Fides 2/7/2021)