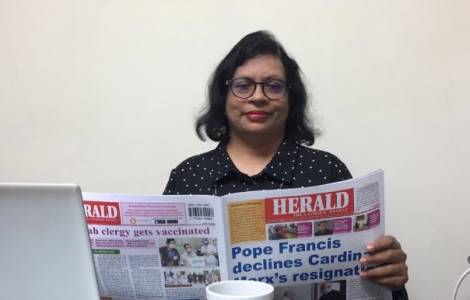 Kuala Lumpur (Agenzia Fides) - The Malaysian Bishops have appointed the first woman as Editor of the Catholic weekly "Herald": she is Patricia Pereira, who has taken on responsibility for the magazine since 1 July. Pereira was in charge of media relations for four years in the Archdiocese of Kuala Lumpur. She started working as an assistent editor of the Herald from 1996 to 2006, then she left the newspaper for a communication experience in the corporate world. She now returns to direct the historical and important weekly of the Catholic Church in Malaysia.
In presenting the Catholic laywoman Pereira at the head of the weekly, Mgr. Sebastian Francis, Bishop of Penang, Mgr. Julian Leow, Archbishop of Kuala Lumpur and Mgr. Bernard Paul, Bishop of Malacca-Johore, said: "Pereira brings with her years of experience in the field of media and communication, both in the Church and in the private sector. We are sure that she will carry out the duties of director for the good of the Church and the community".
Jesuit Father Lawrence Andrew, outgoing Editor, who started the publications and served the Herald for 27 years, told Fides: "In 2020, hit by the pandemic, this print media was transformed into an e-paper that is currently widespread in Malaysia and beyond. Patricia Pereira brings with her the female contribution that will highlight the tenderness that Pope Francis requires of the Church".
Since its establishment on September 8, 1994, in the Archdiocese of Kuala Lumpur, Father Andrew has expanded the distribution of the Herald throughout Peninsular Malaysia and, finally, in the Malaysian states of Sabah and Sarawak, making it not only a diocesan tool, but of the whole Malaysian Catholic Church. In the mission of communicating up-to-date news and Christian values, Father Andrew and his team have become a point of reference in the dioceses. Historical was the legal battle to allow the publication to refer to God with the name of "Allah" normally used by Malaysian indigenous Catholic communities. During the COVID-19 pandemic, Father Andrew ensured that the Herald could continue to reach as many readers as possible thanks to the digital format. "I approach my new role with enthusiasm and a bit of trepidation. I am excited for this great opportunity that was given to me as a lay person called to assume this responsibility", Pereira told Fides.
The new Editor recalls that "Pope Francis has asked that women are to be present in the leadership of the Church and my appointment is proof that the Malaysian Church has always been open in ensuring that women play leading roles. There is the awareness and acceptance that the laity, especially women, can give a valuable contribution to the Church, according to their specificity". "I think it is very important to listen to the voice of the readers, to know and understand their preferences and needs", she adds.
In 2020, the Catholic Research Center led by Father Clarence Devadass conducted a survey of Catholic media and some of the changes that the Director intends to make will also be based on the results of the survey. "I see our publication, Herald Malaysia, as a great tool of evangelization - for catechesis, formation, the enrichment of the Catholic faith", she notes "Our return on investment is not measured in money or economic profit, but in terms of the growth of readers in faith, spirituality, culture, love for the Church". The intent of the work will be "to create a symbiotic relationship between the paper version and the online version".
Malaysia is a multicultural and multireligious nation of 31 million inhabitants with 61% of Islamic faith, about 20% Buddhist, 9.2% Christian (2010 census). Two thirds of the 2.6 million Christians live in East Malaysia, in the states of Sabah and Sarawak (on the large island of Borneo), where they make up 30% of the population. (SD-PA) (Agenzia Fides, 2/7/2021)