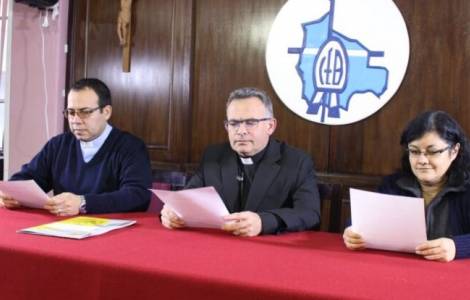 La Paz (Agenzia Fides) - "The Church has been chosen as a facilitator of dialogue for the pacification of the country, due to its enormous experience in the history of Bolivia", said the political analyst Bryan Peñaranda in an interview with "Iglesia Viva", the media of the Bishops' Conference of Bolivia (CEB), on the document "Memory of the Facts in the peace process in Bolivia, October 2019", published on June 15 by the CEB and relaunched in recent days by the country's media.
On October 20, 2019, the announcement of the electoral result by the Supreme Electoral Tribunal (TSE), announcing the victory of outgoing President Morales, was followed by days of strong protests and violent clashes between the supporters of Morales and those of his opponent Mesa, which also caused several deaths. The CEB had expressed its deep concern about the situation in the country, calling for an end to violence among Bolivians and encouraging dialogue between the parties to resolve the conflict, with the declaration "Understanding and peace, with truth and justice" (see Fides, 4/11/2019). Today, "the Bishops of Bolivia, concerned about the various information circulating in the country regarding the events that took place in Bolivia from October 20, 2019 toJanuary 20, 2021, prepared a report-memory because they are convinced of the need to know the truth and from there rebuild national unity", reads the note sent to Fides by the CEB together with the interview with the political analyst. The Catholic Church in Bolivia in 2019 demonstrated that it is maintaining its commitment to pacify the country: after the presentation of the points of the agreement reached between representatives of the Bolivian Bishops' Conference, the United Nations Organization and the European Union, at the end of the dialogues in the weeks of November 2019 (see Fides, 19; 22; 25/11/2019), various dioceses have organized meetings or celebrations to encourage unity among the population. The presence of Catholics has greatly marked the activity of the institutions of an ethical, social and human rights nature. From a geopolitical point of view, the first agreements to negotiate the peaceful future of Bolivia were successful not only because there is an institutional vacuum in Bolivia, but also because the Bolivian people trust those who have put themselves on the same level of life and suffering as the common people, such as Bishops, priests and religious.
Although the document of June 15, 2021 recalls every significant event in its 25 pages, the central theme is the request for non-violence: some groups of the population in fact defend, sometimes in an exaggerated way and without rational reasons, their political position, also resorting to violent acts. In this document the Church renews her commitment to justice, peace and non-violence. In the words of Bryan Peñaranda: "The Church, like a mother who sees her children arguing, tries in every way to pacify, not to agree with one group or another, but to seek reconciliation". After the start of the mandate of the new authorities, on Monday, May 3, Bolivia started a new page in its democratic history in a very fragile context, because there is no political majority in government positions. (CE) (Agenzia Fides, 30/6/2021)

AMERICA/CHILE - Catechists, servants of the synodal spirit, to build a more fraternal Chile

ASIA/IRAQ - Chaldean Patriarch Sako: "The road to church unity is not easy"