AMERICA/PERU - The Bishops: "the Church believes in democracy, defends the democratic system, supports the electoral results" 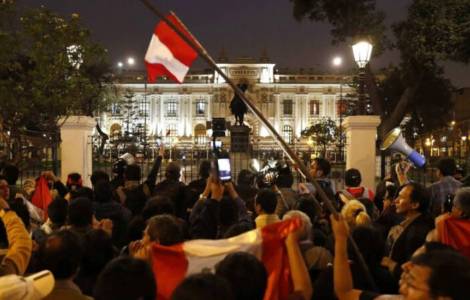 Lima (Agenzia Fides) - Three weeks after the presidential elections in Peru, Pedro Castillo is already serving as virtually elected president, pending his official proclamation, delayed by the insistence of his opponent, Keiko Fujimori, not to recognize the results and to report alleged fraud, without having evidence. Although the fraud has been ruled out by the international community, by experts, election observers and the courts, Fujimori persists in his position, supported by the more conservative right-wing, including a group of retired servicemen who call on the armed forces not to recognize Castillo if he is proclaimed president. With 100% of the vote, Castillo beat Fujimori by about 44,000 votes in the June 6 vote.
The Peruvian teacher and left-wing union leader won with 50.12% of the valid votes. The Peruvian justice last Saturday, June 26, rejected the request to repeat the elections. In this context of uncertainty, the presidency of the Peruvian Bishops' Conference (CEP) issued a note in which it launches an appeal to "strengthen democracy", calling for the creation of "bridges for peace and harmony in the country". "The Church believes in democracy - write the Bishops - because it is the system that best protects and promotes the rights and participation of citizens". For this reason "the Church defends the democratic system, encourages the efforts made to improve it and supports the results indicated by the electoral bodies", reads the document sent to Agenzia Fides.
At the same time, CEP defends "the right of all citizens to express their views on the national situation", but stresses that "this right must be exercised without resorting to violence, neither physical nor verbal". "The future of Peru depends on all of us", continues the episcopal note, "therefore let us act with serenity, discernment and vigilance, to protect democratic life". In view of the Bicentenary of national independence, which will be celebrated on July 28, the Bishops hope that this anniversary "will find a democratic Peru, a democracy defended with great commitment in recent decades", they conclude. (CE) (Agenzia Fides, 28/6/2021)